Randale Moore is a rising American football player. Rondale played American Football in the NCAA for the Purdue University's men's football team as a Wide Receiver. Arizona Cardinals drafted Moore in the second round, overall 49th in the 2021 NFL draft. Moore was named the CBS Sports Freshman of the Year in 2018.

Rondale Moore was born Rondale DaSean Moore on June 9, 2000, in New Albany, Indiana. He is the son of Quincy Ricketts and her husband. Rondale attended Trinity High School and graduated with a four-star recruit.  Moore holds American nationality and is of African-American descent. Rondale stands five feet and seven inches tall and weighs 82 kgs.

Rondale started playing basketball growing up. He played American football and basketball together until their sophomore year of high school at Albany High School. The player was part of the 2016 4A Indiana State basketball championship team. Moore moved to Trinity High School for his senior year. After graduating from High School, Rondale initially committed to playing for the University of Texas at Austin but later changed to Purdue University.

Rondale scored 313-yard all-purpose yards in his first game with the team, and the score was the record for most in program history.  Moore was named the Co-Freshman of the Week in the Big Ten Conference. In his freshman year, Rondale was named  Big Ten Freshman of the Week four times. At the end of the season, The player had recorded 1,164 receiving yards and 203 rushing yards to go along with thirteen combined touchdowns. He won the Paul Hornung Award and Richter-Howard Receiver of the Year.

For the sophomore year, Moore played in just four matches with a 13.3 average per game. He played in three games and recorded 35 points with 7.7 points per game. In early 2021, The player listed his name for the 2021 NFL draft and his friends, Najee Harris, and Trey Lance. Arizona Cardinals drafted him in the second round, overall 49th.

Rondale is living a single happy life on his own. Moore is very much early in his career. He must be very much focused on his career rather than focusing on his relationships. The player is very much close to his family, mother, and friends. His Instagram account of 77k followers is filled with pictures of his mother and his friends.

New Albany Native Moore did not earn a penny while playing for his university. As per the rules, University doesn't pay the players to present the team. Rondale got athletic scholarships which helped him to cover most of the expenses. 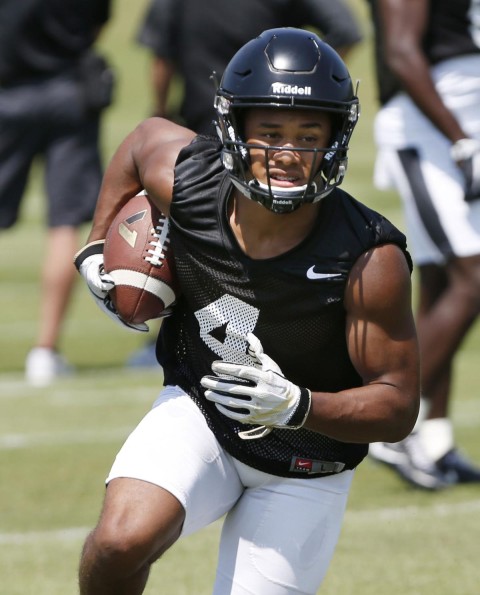 Elijah played in the NCAA for Purdue SOURCE: Getty Images

A rookie player earns more than $600,000 while playing the NFL, and a player drafted in round two makes more than $3.5 Million. Moore is about to sign a deal with the Cardinals worth millions. He will be adding a huge sum to his net worth through his successful career in football and through several other deals.