Najee Harris is a rising American Football player. He is currently playing as the running back for the Alabama Crimson Tide. Najee has already played in more than half-a-dozen Bowl Games in his college career, including the 2018 Sugar Bowl, 2019 National Championship Game, 2021 Senior Bowl, and a few more. Harris is up for the 2021 NFL draft.

Najee Harris was born Najee Jerome Harris on March 9, 1998, in Martinez, California. He is the only child born to Tinna Hicks and her former husband. He is yet to utter about his early life and his parent's information with the media. Tinna raised her son as a single mother. Najee graduated from Antioch High School and enrolled at the University of Alabama. Talking about his physical appearance, Harris stands six feet and two inches tall and weighs 104 (230 lbs).

How Rich is Najee Harris? Know About His Earnings, Salary, and Net Worth

Najee is yet to turn professional in his career. He could start his career as a professional American football player if selected by the NFL franchise in the upcoming 2021 NFL draft. Many experts express that Harris will be picked in round 1 of the draft. He is regarded as the best Running Back in the current draft. 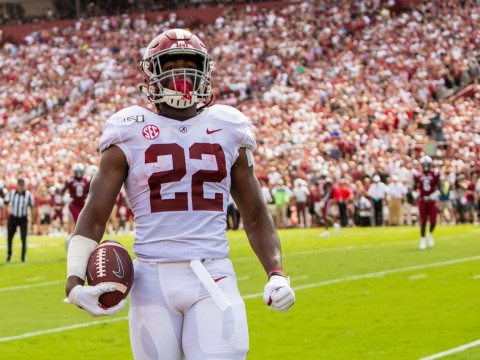 Harris is listed for the 2021 NFL Draft SOURCE: Business Insider

The average salary of a Rookie American Football player is more than $450,000. Harris will be landing in millions of dollar contracts as several other candidates like Patrick Surtain II and Trey Lance.

Who is Najee Harris Dating? Know About His Mysterious Relationship Status

Najee is very much early in his career. In an interview, he mentioned that He wants to focus on his career before starting a relationship. He is very close to his mother as she was the one who stood by his side when nobody was there. Najee Harris is single as of early 2021.

Harris started training for American Football from his High School. He was considered the #1 recruit in the class of 2017. During his High School career, Najee rushed more than 7,000 Yards and almost 100 Touchdowns. Before completing High School, The player got multiple scholarships from top football programs, including Alabama Crimson Tide, Michigan Wolverines, Ohio State Buckeyes, USC Trojans, and a few more.

In the end, Najee committed to staying with Alabama Crimson Tide. During his Junior Year and Senior Year of High School, The player made it to USA Today High School All-American. In his first year at the team, His team won the 2017 CFP national champion. Then in the following year, Harris made into the Second Team All-SEC.

In his junior year, Harris had a very successful year. He was part of several events-winning teams. He was voted as the MVP in SEC Championship Game. Harris also made it to Unamious All-American, First Team All-SEC. His team won CFP Champion and SEC Champion Game. In 2020, Many speculated that he would declare for the 2020 NFL draft, but he did not and has opened for the 2021 NFL draft.