Roger Sloan is a well-known Candian professional golf player. He is currently playing in the professional leagues for more than a decade. Roger turned professional in 2009 and started his career at Web.com Tour and Canadian Tour. Sloan has won one Korn Ferry Tour and one other title in his professional career.

Roger Sloan was born Roger Brandon Sloan on May 15, 1987, in Calgary, Alberta. He is the son of Curtis Sloan and his wife, Cathy Sloan. After graduating from High School, Sloan enrolled at the Univesity of Texas at El Paso and played golf for the University golf team. Roger stands six feet and two inches tall and weighs 79 kg.

Know About Roger Sloan's Net Worth, Career Earnings, and Sponsors

Roger Sloan has an estimated net worth of more than $2 Million. He has accumulated most of his net worth through his career in the PGA Tour, Canadian Tour, and Web.com Tour. Sloan must be making a reasonable amount through his sponsorship deals with Titleist, Ecoasis, Sligo, Footjoy, Sportbox Group. In the ongoing season of 2021, The Canadian player has earned $591,308 while playing in twenty-four PGA events. 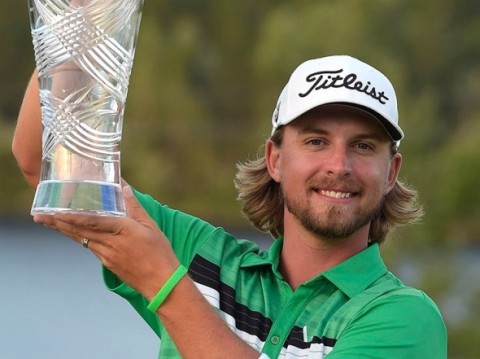 Roger along with his Web.com Tour title SOURCE: Canadian Sports

Roger earned his PGA Tour card in the 2013/14 season and took home $133,048 in his rookie year while appearing in twenty games. He lost his Tour card and made a comeback in the 2018/19 season. Sloan earned $1,015,661 as his prize money, which still remains as his highest-earning in a single season.

Last season, Numerous events got canceled due to the COVID pandemic, Roger played in twenty PGA events and took home $253,597 making cuts in seven games. He has earned the most from the Puerto Rico Open with a total earning of $233,610 from four appearances.

Who is Roger Sloan Married To? Know About His Wife and Children

Roger walked down his wedding aisle along with his longtime girlfriend, Casey Rogereh in August 2013. The love birds had a private and beautiful wedding ceremony in their hometown in front of their close relatives and friends. They had been dating each other for several years before their marriage. The couple got engaged in April 2012. Roger shares a photo with his wife and their children SOURCE: [email protected]

Roger and Casey opened about expecting their first child in August 2017. The duo was blessed with their first child, Leighton Mattox Sloan in September 2017. The family of three extended to four after the birth of Jude Oliver Sloan. Both of them are active on social media and keep sharing numerous photos of their traveling and holidays.

Roger played golf for the High School team and then represented the University of Texas at El Paso. Sloan turned professional in 2009 right after graduating from University. He won his first title at the Western Championship in the Canadian Tour. In 2014, Roger won Nova Scotia Open at the Web.com Tour and his card for the PGA events.

Roger has played in five PGA seasons and appeared in ninety-four games. He is yet to win a major title in the PGA events. Sloan will be playing in the league for sometime before retiring along with Adam Hadwin and Adam Schenk