2X PGA Tour winner, Hudson is an American professional golfer who currently competes in the PGA Tour. He finished his collegiate career at the University of Georgia and turned professional in 2011. his highest ranking as of December 2020 is 75 which he recorded on 2nd April 2017.

Tallahassee, Florida native, Huson Swafford was born on 9th September 1987, under the star sign Virgo. By nationality, he is an American and belongs to a white ethnic background. Moreover, the thirty-three years old stands 6 ft 3 in (1.91 m) tall and weighs 200 lb (91 kg; 14 st).

Hudon Swafford has an estimated net worth of $3 million at present time. How he made millions of dollars: the professional golfer Professional golfers are paid a percentage of the purse for each tournament they play in and finish in the money. Like other athletes, well-known professional players are paid to endorse products and not just golf equipment or clothing.

A professional since 2011, Hudson Swafford joined the Nationwide Tour the following year. He kissed his first victory on 6th May at the Stadion Classic at UGA, shooting a course record 62 in the final record.

In 2013, he played in the Web.com Tour Finals ad finished 21st to earn his PGA Tour card for the following season. His first PGA Tour win came on 22nd January 2017 at the CareerBuilder Challenge.

On 27th September 2020, he lifts his 2nd PGA Tour trophy at the Corales Puntacana Resort and Club Championship. Swafford was playing with a Major Medical Extension following a rib injury and foot surgery.

Hudson was born to parents: David and Jean Swafford. He has a sister, named Alva Striplin-Swafford.

Swafford enrolled at Maclay High School, Tallahassee, Florida. Upon graduation, he attended the University of Georgia, where he received a B.S. in Consumer Economics.

Hudson Swafford is a married man. He tied the knot with his girlfriend, Katherine Wainwright Brandon in December 2013 in an intimate wedding ceremony. After five years of marriage, the couple welcomed their first child, a son Jame to the world in 2018. 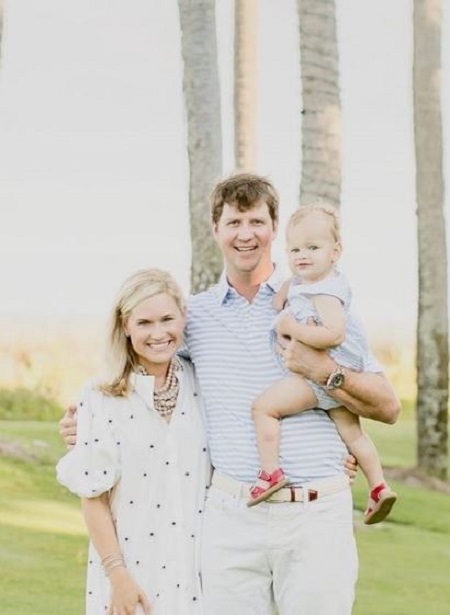 Hudson Swafford with his wife and son SOURCE: Instagram @hud_swafford

Hudson often shares beautiful pictures with his wife and son on his official shy. He is not shy to flaunt his love to his wifey in front of the world. On the contrary, his wife, Katherine is a low-key person. Unlike other wags, she does not prefers to showcase her personal life in media but appears in most of her husband's game.