Matt Every is a well-known American professional golf player. He has been playing professional golf since 2006. Matt currently competes in the PGA Tour and played Nationwide Tour before this. Every had won three professional tours to date, including Two PGA Tours and a Korn Ferry Tour. He won several amateur tours in his early career.

Matt Every was born Matthew King Every on December 4, 1983, in Daytona, Florida. Matt rose to fame only after his successful career with golf so, information about his early life is under investigation. Matt has not uttered a single word about his personal life with the public. Talking about his physical appearance, Matt stands five feet and eleven inches tall and weighs over 86 kgs. He graduated from Mainland High School and enrolled at the University of Florida on an athletic scholarship.

Every has accumulated a hefty net worth through his successful career in golf. A golf player does not need to win a series to earn money. He/She earns as per the score of his/her game in the whole event. Also, he earns lucrative sums through sponsors, advertising deals, and several other sources.

Married Life of Matt Every

Matt is a marrid man. He walked down the wedding aisle with his wife, Danielle Every, on August 15, 2009. Soon after the wedding, the duo welcomed their first child, a Liam boy, in June of 2012. In 2014, the family of three extended to four after their second child's birth, a daughter, Quinn Palmer. 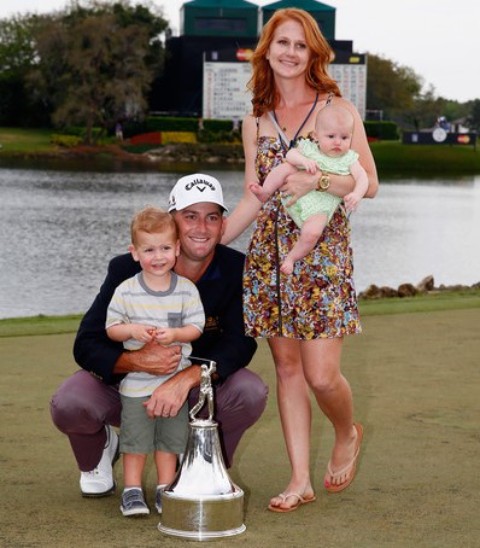 Matt with his wife and their children SOURCE: Zimbio

However, this happy-looking marriage never remained the same after the birth of their children. In 2016, he admitted he was seeing a therapist. He also filed for divorce that year from his wife Danielle after nearly seven years of marriage, but there has been no dissolution, according to court records.

Daytona Native Matt played in the National Collegiate Atheltic Association. He turned professional in 2006 and made his debut in the Nationwide Tour in 2008.  He finished the season with four top-10 finishes and earned $180,000 in earnings. In 2009, Matt won his first title of Nationwide Tour.

In 2014, Every won his first PGA Tour win at the Arnold Palmer invitational. In 2019,  it was announced that the PGA Tour had been suspended every three months for violating its conduct policy for drugs of abuse.