Beau Hossler is a well-known American professional golfer. Beau is the youngest player to cut a U.S. Open since 1945 at the age of 17. He finished the competition in 29th position. He won more than half a dozen of amateur championships. Beau even made it to the Air Capital Classic on the Web.com Tour even before graduating.

Beau Hossler was born on March 16, 1995, in Austin, Texas. He is among the two children born to Amy Balsz, and her husband, Beau Hossler Sr. Beau, has a younger sister named Danielle. Beau hasn't shared information about his parents and their economic career. After graduating from Santa Margarita Catholic High School, Beau enrolled at The University of Texas with a golf scholarship.

Beau Hossler has been earning million since he turned professional in 2016. Beau has an estimated net worth of more than $3 Million. As a golfer, Hossler makes as per the score he scores and performs in a whole tour. Also, A golfer accumulates a hefty sum through his endorsement deals, sponsorship and contracts. Talor Gooch is another rising American professional golfer with a similar net worth of Beau. 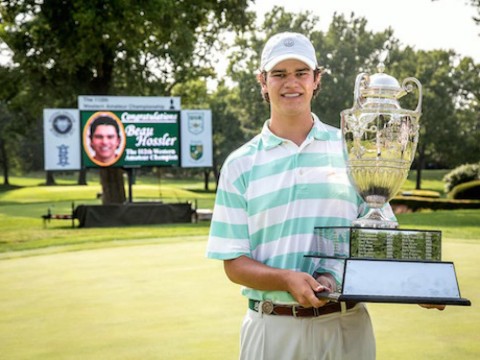 In the first year of his career, The American golfer earned $77,000 as his prize money. In the 2017/18 season, Beau played 28 events and became runner-up in two games. He took home a total of $2,449,707. This remains as the highest-earning per season in his career. Since then, he has earned more than $1.5 Million from golf.

Adding all the prize money, Beau has earned close to $4 Million from the golf. In 2016, Beau signed an endorsement deal with Konica Minolta. He was the global ambassador for the company. Both parties never spoke about the deal amount.

Beau Hossler is unmarried till date. However, he is involved in a romantic relationship with his girlfriend. In 2017, Beau opened about his relationship status for the first time. He mentioned that He and his girlfriend have been together since high school but started dating in college.

Beau started playing golf from early teens. He came to the limelight after cutting the 2012 U.S. Open. He finished the competition for the 29th ranking. Beau won Junior Ryder Cup in 2012, Pamer Cup in 2015. Hossler won several other amateur cups before turning professional in 2016.

The American golfer finished his debut tour as a runner-up and qualified for Web.com Tour. At the end of the season, He earned his promotion to the PGA Tour. However, He did not have an excellent start to his PGA Tour. Beau lost in a sudden-death playoff.