Rodolfo Pizzaro is a rising Mexican professional football player. He is currently playing in Major League Soccer in the United States for the Inter Miami Club. Pizarro plays as an attacking midfielder for his club and national team. Rodolfo turned professional in 2012 and started his career for the Pachuca.

Rodolfo started training football from a very early age. He joined Orinegros Ciuded Madero in 2009. Pizarro played with the youth club for two years and then joined the Pachuca youth club. Pizarro made his professional debut in 2012 and scored his first goal for the team in 2013. The Mexican player who played with the team for the next four seasons appeared in 134 games and scored eight goals for the club. Rodolfo was part of the 2016 Clausura Championship winning team. 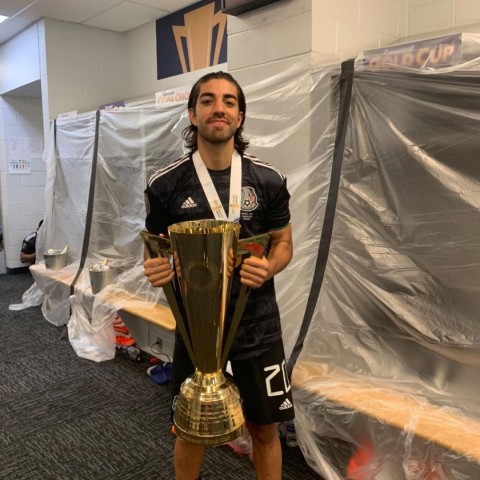 At the end of the 2016 season, Rodolfo joined Guadalajara for a $15 million transfer fee. In the next two seasons with the club, He played in forty-five games and scored thirteen goals. In 2017, Pizarro won the Clausura Copa MX final, and the following season, Rodolfo won the Best Young Player award and was listed on the Best XI of the tournament.  In June 2018, The Mexican player moved to Monterrey and helped the team win the 2019 CONCACAF Champions League Finals.

In February 2020, Rodolfo moved to Major League Soccer and joined David Beckham's Club, Inter Miami. Talking about his international appearance, Pizarro has represented Mexico in numerous divisions and plays for the senior team. He made his international debut in 2014 for the U21. In 2014, Pizarro made his senior team debut. Since then, The Mexican player has played in thirty-one international matches.

Rodolfo is an active social media user. He keeps sharing a lot of his photos in his Instagram timeline. Following his social media accounts, we can believe that Pizarro is single as of 2021. The Mexican player is very much leaned towards his career rather than spending time with people.

Rodolfo Pizzaro has an estimated net worth of more than $20 Million. He has earned most of his net worth through his successful career as a football player. Pizzaro has been playing in the professional league for more than a decade. The Mexican player signed a $15 Million deal with Guadalajara.

In 2018, Pizzaro moved to Monterrey and signed a $16 Million fee with the team. Rodolfo is  Inter Miami’s second-highest-paid player with a guaranteed compensation of $3.35 million. Gonzalo Higuain is Inter Miami’s highest-paid player with a guaranteed compensation of $5,793,750. He will be adding much more to his net worth in the future.