Carlos Fierro is a rising Mexican professional football player. He is currently playing in Major League Soccer in the United States for the San Jose Earthquakes. Carlos plays as a Winger while playing for his club and country. Fierro started his professional career in 2011, playing with Guadalajara in the Mexican Football League.

Carlos Fierro was born Carlos Eduardo Fierro Guerrero on July 24, 1994, in Ahome, Sinaloa, Mexico. He is the son of Irma Guerrero Trasvina and her husband. Carlos had a brother named Gustavo Ivan Fierro, who passed in 2011 due to cancer. Carlos stands five feet and nine inches tall and weighs 69 kg.

Carlos started playing football with his elder brother from a very early age. He started playing football for a club subsidiary of Guadalajara in Sinaloa. In 2007, His brother joined C.D. Guadalajara for a youth career, and Carlos followed his brother's footsteps the following year. After just a few seasons, His brother was diagnosed with cancer and left his career, but Carlos continued his football journey.

Carlos trained with C.D. Guadalajara until 2011 for the youth club and then made his senior team debut in August 2011. Fierro devoted his early days to his club until 2018. He played for Queretaro for a season in the 2016 season for a loan season. During his time with the club, Fierro appeared in twenty-two games and scored two goals.

Carlos appeared in 153 games for the club and scored eleven games. In 2018, He moved to Cruz Azul and played for a season. In the middle of the season, He was loaned to Morelia simultaneously. In June 2019, San Jose Earthquakes signed him as the new player.

Carlos has started and represented Mexico for numerous divisions. He made his international debut in 2011 with the Mexico U17 team. Fierro was part of the U20 team in 2013 and represented U23 from 2014 until 2016. Carlos has not got his chance for the senior team.

Carlos is engaged to his longtime girlfriend, Janette Cazarez. The duo got engaged in December 2020. Fierro shared the happy news through his posts on Instagram. The Mexican player started dating in early 2019 and has been together ever since. 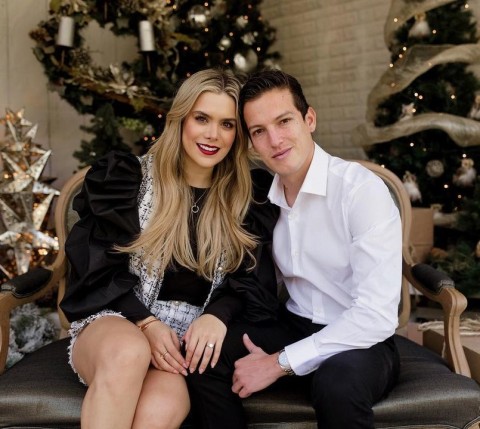 Carlos shares a photo with his fiance at an event SOURCE: [email protected]

In April 2021, Carlos opened about expecting their first child together. Both of them are active social media users and keep sharing a lot of their photos.

Carlos Fierro has an estimated net worth of more than $3 Million. He has been playing in the professional league for almost a decade. In 2017, Fierro signed a $3 Million signing fee with Cruz Azul. After spending two seasons with the club, Carlos signed with San Jose Earthquakes, but the signing fee has not been disclosed. Fierro has a base salary of $850,000 and guaranteed compensation of $908,800 in the ongoing season of 2021.