On 27th February 2013, McGruder was named a top 30 finalist for the Naismith College Player of the Year. McGruder previously played for the teams including Orlando Magic, Maine Red Claws, and Golden State Warriors.  No. 17 – Miami Heat's Shooting guard / Small forward has an estimated net worth of $2 million in 2019. Furthermore, his relationship status is possibly single and unmarried.

Rodney McGruder Net worth and Salary

Rodney McGruder earns a tremendous amount of money from his professional basketball career. As of 2019, McGruder has an estimated net worth of around $2 million. Before playing for Heat, he played for teams like Golden State Warriors, Maine Red Claws, and Orlando Magic.

Moreover, he further added money from his college basketball career.

Rodney McGruder has gained wide recognition from his profession. However, even being such a renowned player, McGruder often keeps his personal details away from the public. To date, McGruder is not married and is not dating anyone currently. 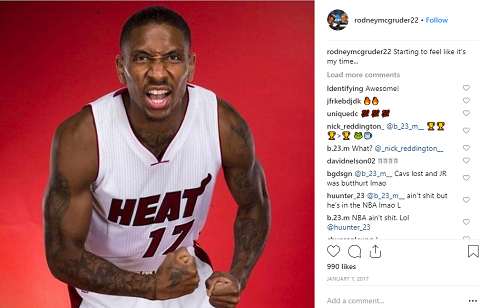 So far, there are no records of his past relationships too. Moreover, McGruder hasn't faced any rumors regarding his love affairs. McGruder is also active in social media like Instagram and Twitter, but so far, he hasn't shared photos of any girl.

As McGruder is not married yet and is not dating anyone, his sexual orientation is straight. Rather than being involved in any kind of personal stuff, McGruder might be focusing on his career.

Rodney McGruder previously played for Kansas State along with an AAU teammate Michael Beasley. Likewise, he also played 2010–11 season for Wildcats and averaged 11.1 points and a team-best 5.9 rebounds per game. In his junior year, McGruder scored 15.8 points per game.

During his senior years, on 27th February 2013, McGruder was named a top 30 finalist for the Naismith College Player of the Year.

McGruder remained undrafted in the 2013 NBA draft so he joined Orlando Magic for the Orlando Summer League. Moreover, he also joined Charlotte Bobcats for the Las Vegas Summer League.