<>Riddick Bowe is a well-known retired American professional boxer. He started his professional career in 1989 at the age of twenty-two and played until 2008. Bowe won twice as the world heavyweight champion. He also won the undisputed WBA, WBC, and IBF titles by defeating then-unbeaten former undisputed heavyweight champion Evander Holyfield. Riddick won the gold medal in the 1985 Junior World Championships in the Light Welterweight division.

Riddick was born Riddick Lamont Bowe on August 10, 1067, in Brooklyn, New York City. He is among the thirteen children born to Dorothy Bowe and her husband, William Stanley Bowe. His brother Henry died of AIDS, and his sister Brenda was stabbed to death by a drug addict.

Riddick Bowe Net Worth and Earnings From Boxing Career

Riddick Bowe's Net Worth has been a mystery to most of his fans around the world. Bowe filed for bankruptcy in 2009. He blames his advisers for mishandling his money. As per reports, Bowe earned more than $50 Million from his professional boxing career. 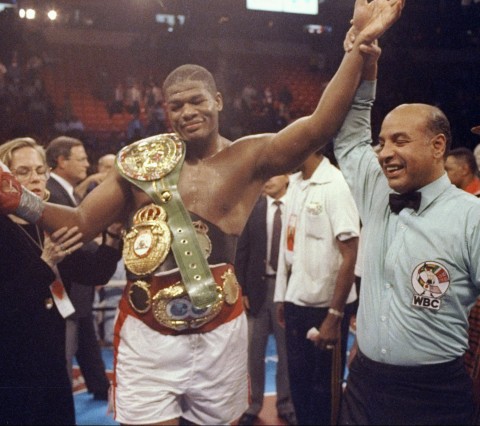 Bowe was ranked at no.4 in the Highest-paid athlete in 1995. He took home $22.2 Million from the single season. He earned $22 Million as his salary and winning bonus and $200,000 from endorsement. He made more than $12 Million from a single fight against Evander Holyfield. Bowe brought in millions through fight purses and endorsements from companies such as FILA.

Riddick is very much private about his personal life at the moment. Bowe could be living a happy life with his family or living alone on his own. Earlier, Bowe was married to his longtime girlfriend, Judy Bowe. The duo tied their wedding knot in the early 1990s. Soon after the wedding, the duo was blessed with five children.

In 1998, they had some personal disputes, and Judy parted ways and lived in Charlotte, North Carolina, with children. Bowe wanted to reconcile and kidnapped his wife and children and tried to bring them back to his home in Maryland. However, Police freed them after Judy called her sister and informed her of the situation. Her sister alerted authorities, and within minutes. Bowe was arrested and taken into custody. As per reports, Bowe had suffered brain injuries in his years of boxing, which was a factor in his decision to kidnap his wife.

Riddick's wife filed for divorce in May 1998 mentioning physical abuse as the reason for separation.

Boxing Career and Next Fight

Riddick won Silver Medal in the 1988 Olympic Game in the Superheavyweight category. He turned professional in 1989 and made his debut against Lionel Butler. In his first three years, Bowe won twenty-five matches and did not lose a game. He won his first title of the vacant WBC Continental Americas heavyweight title.

Bowe lost his first match against Evander Holyfield in November 1993. He lost his WBA and IBF heavyweight titles. In 1995, He won another WBO title of heavyweight. The American boxer retained his title for the next three matches. After 1996, Riddick did not play a single game and returned to boxing in 200 against Marcus Rhode. Bowe played his last game in 2008. He is thinking of making a comeback at the age of Fifty-Three.