Richard Gasquet is a well-known French professional tennis player. He is currently playing in the ATP and ITF tournaments worldwide. Richard is a bronze medalist in the 2012 London Olympics Games in Men's doubles. Gasquet has won fifteen single titles in his career. Richard is the only six active player on the ATP tour to win 550 matches.

Richard Gasquet's Career Earnings and Net Worth from Tennis

Richard has an estimated net worth of more than $15 Million. He is listed along with the highest-earning tennis players, with a total earning of $18,836,446 from singles and doubles until July 2021. Richard must be making a handsome amount through his numerous sponsorship deals with Asics, Le Coq Sport, and a few more. 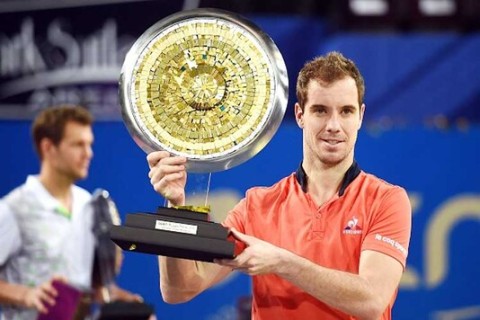 Richard has already earned $314,372 as his prize money from almost twenty games. Last season, He took home $396,616 when he played in twenty games. In his rookie year of 2002, Gasquet made $59,232 while appearing in six games. He crossed his income to three figures the following season with a total earning of $105,464 playing in ten ATP games. In 2005, Richard came to the spotlight after finishing the season with $641,748 as his earning when he won a title at Nottingham Open.

In the 2013 season, Richard earned $2,387,177, the most in single-season to date in his professional career. Gasquet will be adding much more to his net worth in the future.

Unlike other tennis players, Richard is very much private about his love life in public. He has not shared a word to date. Gasquet was involved in a romantic relationship with Laury Thilleman for a brief time in 2012. They could be seen in public, but shortly they separated and moved on. Since then, there is no rumor of his dating anyone in public.

Richard finished his junior career with a 44–7 career singles record and a 10–4 career doubles record. He was ranked at No.1 in September 2002. Gasquet made his professional debut on the ATP tour at Tennis Masters Series. He was the second-youngest player ever to compete in the main draw of the Grand Slam. In 2005, Richard stunned then-No.1 Roger Federer in the quarterfinals of the Master Series tournament. Gasquet lost to Rafael Nadal in the semi-finals. Gasquet won his first Grand Slam singles match at Roland Garros.

In 2006, Richard won three ATP tour singles titles. The following season, He reached his first Grand Slam singles semifinal and ended the season at World No.7. In 2009, The French player had ups and downs in his career after testing positive for cocaine. He was initially suspended but was later allowed after going through some tests. In 2010, Richard reentered in the top 10 rankings and won his sixth title. 2012 season remains one of the best seasons as he won a Bronze medal in the Olympic and Hopman Cup.