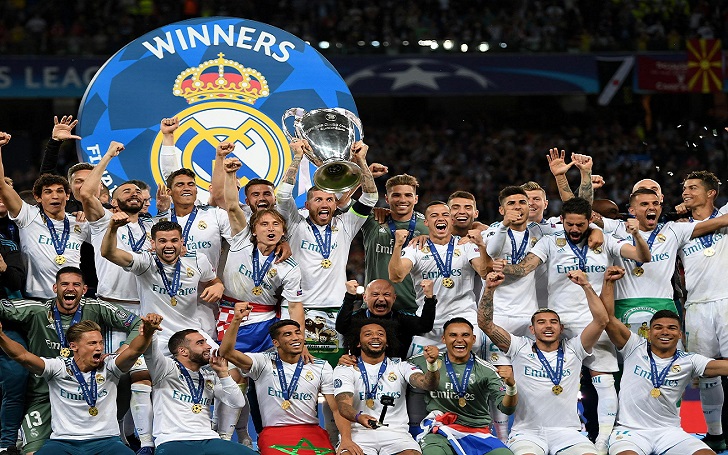 Spanish Giants Real Madrid defeated the Premier League club Liverpool by 3-1 in the finals of the Champions League 2018 to win their 13th UCL title- most by any club in the history. This is the third consecutive UCL trophy won by Madrid having won previously in 2016 and 2017.

Gareth Bale's two outstanding goals after coming on as a substitute sealed their third European title.

Liverpool lost their top player Mohamed Salah in the first half which merely lost their confidence of winning the title. He met a shoulder injury on a challenge with Sergio Ramos. Real Madrid left-back Dani Carvajal also had to leave the pitch shortly after some time with injury.

Real Madrid took the lead with a goal from Karim Benzema in the 51st minute. Liverpool goalkeeper Loris Karius had a disastrous night as he made two blunders. The first goal by Benzema was one of them.

What a mistake from Karius as his throw gets blocked by Benzema and ends up in the back of the net! pic.twitter.com/F5KsQ8ts1Y

Sadio Mane equalized shortly after from a header in the corner kick in the 55th minutes.

Real Madrid looked so quick into the game after the arrival of Bale in the 61st minute. The substitute happened to be the match turning point as he scored a beautiful bicycle kick goal in the 64th minutes through Marcelo's assist.

It's 13 UCL titles by Real Madrid, third in a row and fourth in the last five years. With this, Zinedine Zidane has become the first manager to make hattricks of UCL title in the history. Despite not finding the net, Cristiano Ronaldo was the top scorer of the season with 15 goals.

Following the game, Bale and Ronald left doubts over their star in Madrid. Talking to media, the Welsh star said he needs more play time and games. He said:

I was very disappointed not to start the game. I felt like I deserved it but the manager makes the decisions and what can you do? The best I've been doing is to come on and make an impact, and I did. I need to be playing week in week out, and that’s not happened this season for one reason or another. I had a five- or six-week injury at the start of the season and I’ve been fit ever since so now I have to sit down in the summer and discuss it with my agent and take it from there.

Ronaldo also hinted his exit from Real Madrid after the game. He described his time in Madrid as the past. He said:

It’s been very nice to be at Madrid. In the coming days, I will give a response to the fans because they actually have always been at my side.

The Portuguese star might make his move to his former club Manchester United as they reportedly made the swap deal with Paul Pogba plus £61.5 million.