Paul Anthony Pierce a.k.a. Paul Pierce is an American retired basketball player who played 15 seasons for Boston Celtics and then for Brooklyn Nets, Washington Wizards, and Los Angeles Clippers. After his college career with Kansas, he was drafted by Celtics in round one of the 1998 NBA Draft. The basketball small forward has also represented his national side in the 2002 FIBA World Championship.

As of 2019, Pierce has a jaw-dropping net worth of $70 million. The hunk is married and has three children together with his wife.

Paul Pierce was born as Paul Anthony Pierce on October 13, 1977, in Oakland, California, to George Pierce and Lorraine Hosey. His star sign is Libra. Further, he holds an American nationality and belongs to Afro-American ethnicity.

He has two elder brothers, Jamal and Stephen. Both the brothers have received scholarships for college athletic i.e. Jamal for basketball and Stephen for baseball. Raised in Oakland, California, later on, his family moved to Inglewood, California, where he attended Inglewood high school.

At the high school, he was cut from Inglewood High's varsity basketball team during his freshman year and sophomore year. Later, he seriously thought about transferring prior to spending extra time in the gym and becoming the star of the team by the end of his junior year.

He went to participate in McDonald's all-American game with future NBA stars Kevin Garnett, Stephan Marbury, Vince Carter and Antawn Jamison in 1995. There he was the contestant in the game's slam dunk contest, which was won by Carter.

He grew up as a Los Angeles Lakers fan and dreamed of playing with the Lakers. He was honored as one of the 35 greatest McDonald's All-American on January 31, 2012. He scored 16.4 points and 6.3 rebounds per game in his three seasons at the University of Kansas. There he majored in crime and delinquency studies and earned MVP honors in the big 12 conferences in both 1997 and 1998. He played for Roy Williams who is the hall of fame at Kansas.

Following his junior season, Pierce left the University of Kansas to enter in the 1998 NBA draft.

In the 1998 NBA Draft, Pierce was picked with the 10th overall pick in the 1998 NBA draft by the Boston Celtics. He played 15 years long for the team earning various awards and including 2008 NBA CHampionship and NBA Finals MVP, 10x NBA All-Star, and NBA Three-Point Shootout champion.

In June 2013, he was traded to Brooklyn Nets along with Kevin Garnett, and Jason Terry for Kris Humphries, Gerald Wallace, Kris Joseph, MarShon Brooks, and Keith Bogans.

The following year, Pierce signed a two-year contract with the Washington Wizards. Then on July 2015, he joined the Los Angeles Clippers agreeing on a three-year, $10 million contract. In July 2017, he penned a ceremonial contract with the team in order to retire as a Celtic.

On August 18, 2017, the Celtics declared that his jersey would be retired on February 11, 2018. What's more, Pierce's jersey was raised to the rafters of TD Garden in a postgame ceremony after the Celtics-Cavaliers game, as he became the 23rd person in Celtics history to be honored.

Paul Pierce, 41, is a married man. He exchanged the wedding vows with Julie Landrum on July 17, 2010, at the resort at pelican hill in Newport Coast, California. His spouse is an interior designer and philanthropist. 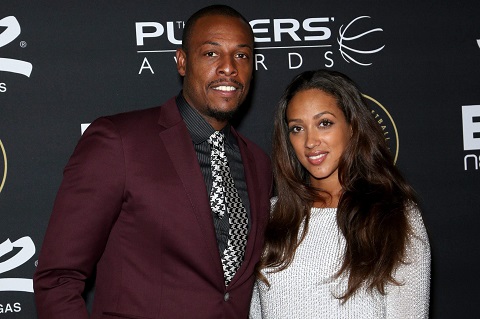 This lovely couple has two daughters, Prianna and Adrian, and a son, prince.

Pierce was stabbed 11 times in the face, neck, and back and had a bottle smashed over his head at the buzz club, a late night dance club located in the Boston theater district. He had lung surgery to heal the injury. Witnesses have said that he was stabbed when he was attempting to separate the fighters. Pierce teammate along with Battie's brother saved him by taking him to the nearby hospital immediately.

As of 2018, his net worth is estimated $70 million, mostly earned through his NBA career. His salary throughout the season is listed below in the table.

Besides, Paul Pierce has listed his Cheviot Hills home in the market for $3.395 million. He purchased the mansion more than a decade ago for his mother after signing his first long-term extension while a member of Boston Celtics.