Apart from playing for different professional football clubs, he has played for Serbia at their youth levels and made his debut for the senior team in 2013.

He has appeared in 28 matches for Serbian since his debut.

He was born to his mother, Ljupka Rajkovic, and father, Sasa Rajkovic, on October 31, 1995, in Negotin, Serbia. He holds Serbian nationality.

He began training football with his father, who was also a goalkeeper. In addition, he has a sibling sister Neda Rajkovic.

Predrag Rajkovic’s Net worth and Salary

Predrag Rajkovic's annual salary is close to $ 900,000, which he gets playing for Maccabi Tel Aviv, and he has a net worth of  €2.5 million in the region.

Looking at his professional and promising career, his net worth is assumed to be more than $1 million. With his fortune, he is enjoying a relaxed lifestyle with his family. He can also be seen spending quality time with his friends and girlfriend.

After playing for the youth team of Jaagodina, he joined the primary team in 2012 and made his senior and professional debut against Partizan on March 9, 2013.

He was part of the team that won the Serbian Cup in 2013.

Rajkovic signed a four-year contract with Red Star Belgrade in late August 2013 and made his debut against  Vojvodina. His 16 clean sheets in 28 matches for Belgrade made him win the best goalkeeper for the 2014/15 season.

Rajkovic is currently playing for Israeli club Maccabi Tel Aviv which signed a five-year contract worth €3 million in August 2015. He made his debut against Hapoel Be'er Sheva on August 30, 2015, and was part of the team that won the Toto Cup in 2017/18. The player moved to France and joined Reims for three seasons. Predrag is currently playing in La Liga with Mallorca.

After representing and winning the UEFA European U-19 Championship in 2013 and FIFA U-20 World Cup in 2015, he made his senior international debut for Serbia against Colombia on August 7, 2013.

He is expected to play with the midfielder Adem Ljajic and fellow goalkeeper Vladimir Stojkovic at the 2022 FIFA World Cup Qatar for the Serbian team led by Aleksandar Kolarov.

He is currently 26 and stands at an impressive height of 6 feet 3 inches with a weight of around 85 kg. He is married to the Siberian model Ana Cakic. They had been dating each other since mid-2017. The duo exchanged their wedding vows in 2018.

Ana is a model and was previously in a relationship with  Veljko Raznatovic, son of folk star Cece Raznatovic. 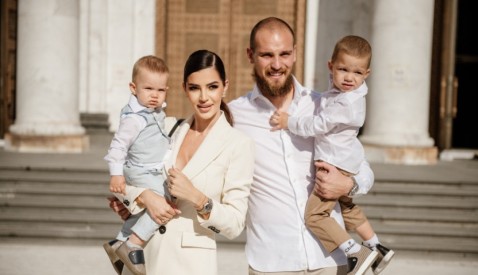 The glamorous pair seems to be happy with each other and is yet to announce if their relationship is going to the next level. Ana is often seen cheering her husband during his match in the stadium.