2019 Morris Trophy recipient, Penei Sewell is an American football offensive tackle who finished his collegiate career playing for the University of Oregon. He forged the junior season due to the COVID-9 pandemic and declared for the 2021 NFL Draft. Sewell is considered to be one of the most highly regarded prospects.

Malaeimi, American Samoa native, Penei Sewell was born on 9th October 2000, under the star sign Libra. The twenty-year-old holds an American nationality and is of Afro-American ethnic background. Regarding his physique, he stands 6 ft 6 in (1.98 m) tall and weighs around 325 lb (147 kg).

Penei Sewell is clearly the best lineman and one of the best athletes in the 2021 class. Reportedly, he is predicted to be the No. 3 picks by the Miami Dolphins. If all goes as per predictions, Oregon Ducks' offensive tackle will earn a million dollars per year.

Since college does not pay to their athlete, Penei Sewell did not earn a penny from his collegiate career. As of 2021, his net worth is under review.

Penei Sewell is the son of Gabriell Sewell and Ariene Sewell. He was raised alongside three siblings: Gabriel, Nephi, and Noah. Like Penei all the three brothers are into football. Gabriel plays for the Nevada Wolfpack as a linebacker while Nephi plays as a defensive back for the Utah Utes and Noah, a linebacker for Orgon. Furthermore, his uncles Issac Sopoage and Richard Brown are former NFL players. 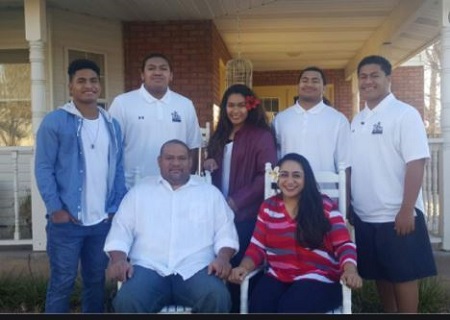 Besides, there is no information about Penei Sewell's love life. It's unknown if the offensive tackle is dating or single. There are no news and rumors popped out in the media regarding him being involved in a romantic relationship. Sewell is pretty famous on Instagram with 29.8k followers.

Penei Sewell enrolled at Desert Hills High School in 2012 where he started playing American football. He played in the 2018 U.S. Army All-American Bowl. He committed to play for the University of Oregon to play college football.

In 2018, Sewell became an immediate starter during his true freshman year at Oregon. That season, he started all seven games. However, he missed six games due to injury. The following season he returned as a starter and won the Morris Trophy and Outland Trophy. Additionally, he and former Alabama quarterback Tua Tagovailoa were named the co-recipients of the 2019 Polynesian College Football Player of the Year Award.

Due to the COVID-19 pandemic, Sewell opted out of the 2020 season declared early for the 2021 NFL Draft. He is regarded as one of the best prospects in the draft and is projected to go within the first three picks. Ja'Marr Chase, Micah Parsons, and Caleb Farley are also the top prospects.