2019 Butkus-Fitzerald Linebacker of the year, Micah Parsons is an American college football linebacker for the Penn State Nittany Lions. A graduate of Harrisburg High School where he played football two seasons (junior and senior) and finished his freshman and sophomore years for Central Dauphin High School.

Harrisburg, Pennsylvania native, Micah Parsons was born on 26th May 1999, under the star sign Gemini. He holds an American nationality and is of Afro-American ethnic background. Regarding his physique, he stands 6 ft 3 in (1.91 m) and weighs 245 lb (111 kg).

How Much Is Micah Parsons Net Worth?

Micah Parsons has declared for the 2021 NFL Draft. Since he is yet to turn professional, the linebacker has not earned a penny from his career. If he goes draft in the upcoming NFL Draft, his annual salary will be in millions of dollars. According to the source, The median salary for all NFL players is $860,000. As of 2021, his net worth is under review.

Micah Parsons' Girlfriend: Is He Dating?

Micah Parsons, the Penn State footballer has more than himself to go to school and play for. The linebacker tweeted a picture of himself and his newborn baby on 1st May 2018. He confirmed in a later tweet that he is now a father. The father and son duo appears here are there on socials. 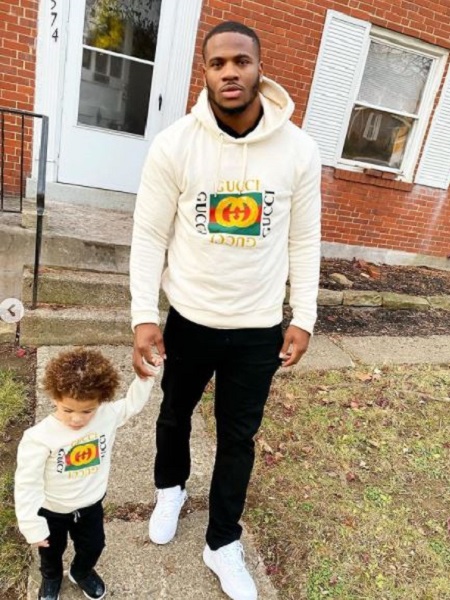 Though the footballer is open about his fatherhood, there is no information regarding his child's mother. Additionally, it is unknown if Micah is in a relationship or single.

Parsons grew up playing football at Sunshine Park. He enrolled at Central Dauphin High School where he played freshman and sophomore years. There he committed to Penn State but later step back from his decision. Further, he transferred to Harrisburg High School starting at both defensive end and running back. Besides, football, he played basketball.

A five-star recruit, Parsons was ranked #4 in his class by 247Sports.com and #7 by ESPN. Besides Penn State, he was recruited by Nebraska, Georgia, Oklahoma, Ohio State, and Alabama. Reportedly, Ohio State committed NCAA violation because the university allowed him on the set of ESPN's College GameDay to photographed with analyst Herbstreit, who was a former Ohio State University quarterback. According to the NCCA rule, recruits are not allowed to have contact with members of the media associated with former student-athletes. As a result, Ohio State agreed to no longer recruit, Parsons.

Parsons formally committed to Penn State University on December 20, 2017, and graduated from Harrisburg High School seven months early to enroll early there. At Penn State, he started at the middle line rather than the defensive end. He became the first Nittany Lion to ever lead the team in tackles as a freshman. In his sophomore year, Parsons recorded 109 tackles, 5 sacks, 3 deflected passes, and 3 forced fumbles. In the 2019 Cotton Bowl Classic, he had a dominating performance and was named the Defensive MVP of the game.