Pedro Gomez is a Phoenix reporter for the SportsCenter show of the ESPN. He is mainly a baseball reporter and a member of the American Baseball Writers Association. Further, he has participated in 15 World Series and more than 10 All-Star Games and is also a member of the Baseball Hall of Fame.

The resident of Phoenix, Arizona, Pedro Gomez, reportedly earns around $85,000, as his yearly salary from the network, and as of 2018, he reportedly has an estimated net worth of over $2 million. He is currently married to his wife Sandi and shares 3 children with her.

Pedro Gomez was born on August 20, 1962, in the United States of America. He holds an American nationality and belongs to Cuban-American ethnic group. Additionally, the details siblings and early childhood are not surfaced in the media yet.

Gomez is the son of Cuban refugees, born only 20 days after the arrival of his parents in 1962 via PAN AMERICAN, two months before the October 1962 missile crisis.

Pedro Gomez after graduating from Coral Park High School and eventually joined the Miami-Dade Community College, and the University of Miami and acquired his  Bachelor's degree in journalism.

Pedro Gomez Net worth and Salary

Pedro Gomez is one of the most popular anchors of ESPN who has made a successful career as a sports anchor. Since ESPN is a popular sports network, it is well known for paying its sportscaster a large amount of salary. Additionally, Pedro Gomez is a regular anchor of the ESPN, he earns a decent salary from the network.

In particular, the ESPN network pays an average wage of $85,000 a year to its employees. Since Pedro Gomez lives in the USA, he lives a standard life with the money he earned from his professional career.

He currently, lives in Phoenix, Arizona, along with his family, and has a beautiful home there.

After working for years in Miami, San Diego, and the San Francisco Bay Area, covering high schools and general assignment sports. Gomez became a full-time baseball beat writer in 1992, covering the Oakland Athletics for the San Jose Mercury News and the Sacramento Bee from 1990 to 1997.

During this seven-year period, he gained a lot of experience as a writer for these newspapers. From 1997 to 2003, his work in Sacramento, San Jose and later as a national baseball writer and general sports columnist for the Arizona Republic in Phoenix led ESPN to hire him to work at the SportsCenter in 2003.

Gomez specializes in the reporting of baseball for ESPN and followed Barry Bonds for the better part of three seasons as Bonds followed Hank Aaron for the all-time home run record.

Pedro Gomez is a married man and is currently in a marital relationship with his lovely wife Sandi. The couple share 3 children; two sons Rio Gomez and Dante Gomez, and a daughter named Sierra. 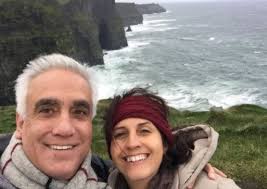 His elder son, Rio Gomez, is a baseball player who has recently been drafted for the famous Boston Red Sox baseball team. He sees his father as his greatest inspiration and would have left baseball after high school without his support.

Pedro Gomez also had a younger brother named Ricardo "Rick" Gomez, who died of liver cancer at the age of 40 on August 3, 2005.