Barry Lamar Bonds is an American former professional baseball player who played as a left fielder for the Pittsburgh Pirates and San Francisco Giants in major league baseball for 22 seasons.

Bonds is often considered as one of the greatest baseball players of all time having made into All-Star selection 14 times and received seven NL MVP awards. He is also the recipient of 8 Golden Gloves. He has an estimated net worth of $80 million.

How Much Is Barry Bonds Net Worth In 2019? Know His Salary History

As of 2019, Barry Bonds has an estimated net worth of $80 million. Though retired since 2007, his jaw-dropping career earnings of over $188 million still rank 5th highest overall in MLB history.

He had earned approximately $172 million throughout the 2006 season during his 21- year career which made him one of the all-time highest-paid baseball players.

Bonds owned a Los Angeles mansion where he lived for about 10 years before selling it for about $25 million in 2014. He also had a Bay Area home which he sold in 2017 for $6.6 million.

It seems like he has a very complicated relationship status. His first wife's name is Susann "sun" Margreth Branco. He met Susann in Montreal, Quebec in August 1987.

Barry Bonds with his first wife and daughter SOURCE: mediaoutrage.wordpress.com

The couple got married in 1988. Susann gave birth to a son on December 18, 1989, whose name is Nikolai Lamar Bonds and a daughter in March 1991, whose name is Shikari bonds.

Unfortunately, the couple separated in June 1994 and divorced in December 1994. The reason behind their divorce was an affair between the bond and his Swedish spouse.

He had an extensive intimate relationship with his girlfriend Kimberly bell for whom he purchased a home in Scottsdale, Arizona.

Later, he got married to his second wife, Liz Watson on January 10, 1998, at the Ritz-Carlton hotel which is located in San Francisco. 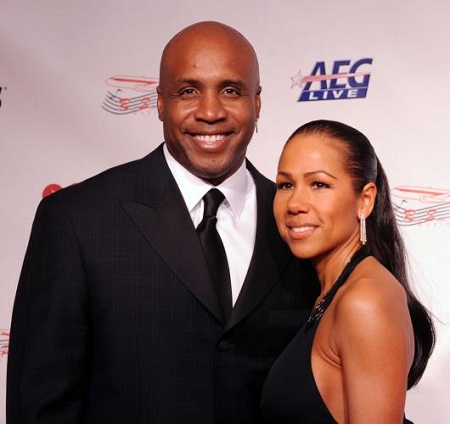 He has a daughter named Aisha Lynn bonds from his second marriage. The couple lived in Los Altos Hills, California, with their daughter, Aisha.

Watson filed for a legal separation citing irreconcilable differences on June 9, 2009, where she announced that she was withdrawing her legal separation action. On June 6, 2011, the couple decided to file a legal agreement not to take the divorce publicly but to end the relationship privately at an unspecified date without the further involvement of a court.

Barry Bonds was born on July 24, 1964, in Riverside, California. He is the son of Bobby Bonds and Patricia Howard. He has two brothers, Bobby Bonds Jr. and rick bonds and a sister, Cheryl Dugan.

His father Bobby Bonds is a former right fielder in Major League Baseball whereas his younger brother, Bobby Jr. is also a professional baseball player. He is a distant cousin of Hall of Famer Reggie Jackson.

Bonds was born in Riverside, California and grew up in San Carlos, California attended Juniper High school which is located in San Mateo, California. There he transcended in baseball, basketball, and football and played on the junior varsity team during the year as a freshman which was the remainder of his high school career on the varsity team. He batted for a .467 batting average and was named as prep All-American during his senior year.

He was drafted in the second round of the 1982 MLB draft as a high school senior by the Giants but the giants and the Bonds were unable to agree on a contract of Tom Haller which was of $70,000 whereas his minimum expectation to go pro was $75,000. So, he finally decided to attend college instead of signing the contract.

Bonds attended Arizona state university where he hit .347 with 45 home runs and 175 runs batted in. he was a sporting news All-American selection during that year.

He graduated from Arizona state university (ASU) with a degree in criminology and was named as the Most Valuable Player on-deck circle of ASU. He was drafted as the sixth overall pick of the Major League Baseball by the Pittsburgh Pirates in 1985.

Barry then joined the Carolina League with Prince William Pirate and was entitled as the Player of the Month for the league on July 1985. he made his major league debut on May 30, 1986, and led Nation league rookies with 16 home runs, 48 RBI, 36 stolen bases and 65 walks finishing 6th in the Rookie of the Year voting.

He won his first MVP Award in 1990, where he hit .301 with 33 home runs and 114 RBIs. He also won his first Gold Glove Award and Silver Slugger Award during that year.

He left the pirates and signed a lucrative free agent contract worth $43.25 million with the giants for over six years with whom his father had spent the first seven years of his successful career. 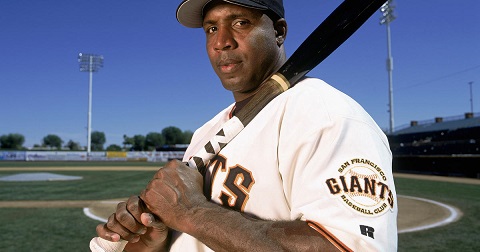 He became the first National League Player and second Major League player to hit 40 home runs and steal 40 bases in the same season in the year 1996.

Bonds tied the previous record of 70 which was set by the American former baseball player, Mark McGwire in the 162nd game in 1998 by homering off the former Major League baseball pitcher, Wilfredo Rodriguez in the 159th game of the season.

He then hit numbers 71 and 72 the following night off Chan Ho Park who is a South Korean professional baseball pitcher and added his 73rd off Dennis Springer who is a former right-handed pitcher in Major League Baseball, known for his use of the knuckleball. The ball was later sold for $450,000 to a toy manufacturer Todd McFarlane.

His 756th home run ball is placed in the Hall of Fame where he hit a 435 foot home run off a pitch from Mike Bacsik of the Washington Nationals, which has broken the all-time record of home run formerly held by a retired American Major League Baseball right fielder, Hank Aaron.

Merry Christmas from my family to yours. We hope you all are filled with happiness and love this holiday season! #merrychristmas #family

Bond is a professional baseball player and the greatest home run hitter of all time who is regarded as one of the great heroes in the world of baseball. Several of bonds family members have been engaged in the sports either as a career or a notable pastime.