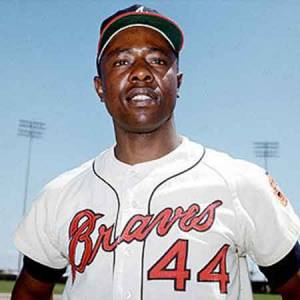 Henry Louis Aaron or famously known as Hank Aaron is a former retired American professional baseball player, currently serving as the senior vice president of the Atlanta Braves. Most of his career, 21 seasons, Aaron played for the Milwaukee/Atlanta Braves in the National League (NL) and two seasons for the Milwaukee Brewers in the American League (AL).

He is most notable as the player to break Babe Ruth's record of 714 home runs, with 755 home runs. He was inducted into the Baseball Hall of Fame in 1982.

Hank Aaron is of American nationality having African American heritage. He was born on February 5, 1934, in Mobile Alabama, United States of America.

Aaron grew up in the poorest black section as the third of the eight children of mother, Estella, and father, Herbert Aaron.

He was interested in playing baseball since his early childhood days and did his schooling from Central High School, where he played both football and baseball.

Aaron, later on, was transferred to Josephine Allen Institute where they played baseball.

Hank Aaron’s Net worth and Salary

Aaron's current net worth is estimated at $25 million.

Aaron was the highest-paid MLB player of his time. On February 29, 1972, Aaron signed a three-year deal with Atlanta Braves, which paid him $200,000 per year, making him the highest-paid player in MLB at that time.

It was also reported that his signed baseball bat cost around $100 to $175.

After leaving school to focus more on his baseball career, he joined the Negro Baseball League’s Indianapolis Clowns and helped the team to win  World Series in 1952.

He is the last African Negro at the Negro Leagues and the Major Leagues and later on signed for  Milwaukee Braves for $ 10,000 and made his League debut in 1954 and went on to win the Triple Crown Championship by scoring 44 home runs, 132  RBI and batting .322 average.

After retirement, he was selected as the executive vice president of the Atlanta Braves and also become the leading spokesperson in the minor leagues in baseball.

He also has a stadium dedicated to his name, Hank Aaron Stadium, in his hometown of Alabama. He published his autobiography, I Had a Hammer in 1990.

Aaron was also awarded the Japanese Order of the Rising Sun for his contribution not to baseball but for being a good ambassador to both Japan and USA.

Talking about his personal life, he is married twice in his life. He was first married to his first wife, Barbara Lucas on October 6, 1953.