Born on 4th July 1997, Malik Fitts enrolled at Damien High School where helped lead the school to a CIF Division III state title as a senior. A native of Rancho Cucamonga, California, he holds an American nationality and belongs to the Afro-American ethnic background.

In March 2020, Fitts announced that he'd forgo his senior season at St. Mary's to enter the 2020 NBA Draft, via his personal Twitter account.

The Power forward is ranked 52nd in 2020 NBA Draft Prospect Ranking by the CBS sports, behind Desmond Bane, Tyler Bey, and Isaiah Joe. In point of fact, media is yet to publish the salary of the 2nd round picks.

However, we can assume the wages of the 52nd pick by comparing it with the previous draftee. The 2019 NBA 52nd draftee, Jalen McDaniels, inked a four year / $6,129,593 contract with the Charlotte Hornets, including $898,310 guaranteed, and an annual average salary of $1,532,398. Hence, Fitts will have a quite similar deal if he goes draft in the upcoming draft.

Malik Fitts' Personal Life; Who is his Girlfriend?

Malik Fitts, 22, doesn't seem to be in a relationship with anyone for the time being. As a NBA prospect for the upcoming draft, the hunk appears to be focused on his career and developing his skills to conquer the NBA. To date, he has not shared any information about having a girlfriend in any media.

Not only love affairs, he chose his personal life (family) far from the media. However, they appear here and there is his Twitter account. 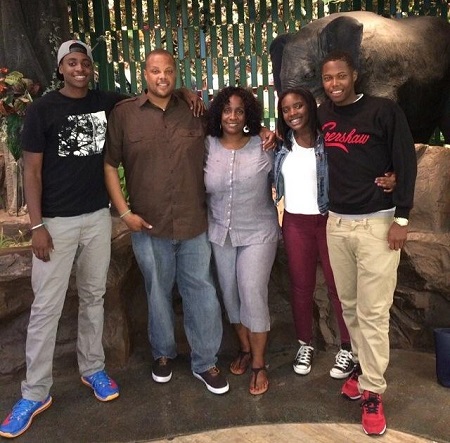 P.J. Washington. Fitts is similar to the Charlotte Hornets big man in that they both can work inside and outside of the paint. Washington has no problem working down low while stepping out and hitting a three when needed. Fitts can grow into a similar role and be a serviceable wing/forward at the next level.