Richmond, Indiana native, Desmond Bane is a college basketball player for the TCU Horned Frogs of the Big 12 Conference. After his junior season, "tested the waters" of the NBA draft but returned to TCU and finishing his senior season he declared for the 2020 NBA Draft.

Born on 25th June 1998, Bane is the second-round prospect for the upcoming draft. He holds an American nationality who came from the Afro-American ethnic background. 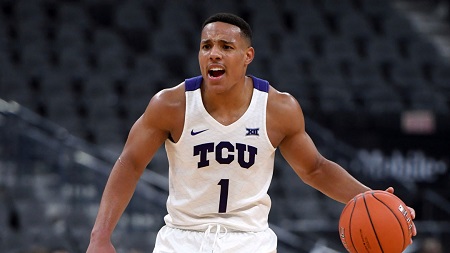 A matter of fact, media has only provided the payroll up to 30th pick draftees. Nevertheless, we can assume the contract/salary of 42nd pick by the previous draftee contract. The 2019 42nd draftee, Admiral Schofield signed a 3 year / $4,300,602 contract with the Washington Wizards, including $2,517,981 guaranteed, and an annual average salary of $1,433,534.

Hence, Bane is expected to have a pretty same contract if he goes draft in the upcoming draft.

No. 1 – TCU Horned Frogs' Point guard / Shooting guard, Bane is in a relationship with his mysterious lady. Nevertheless, he has shared less to no information about his girlfriend or about their love story. He is a low key person.

A matter of fact, he revealed his relationship status in an interview with Hoopehype. When asked How would you describe yourself as a person? he said |"I’m a gym rat. No question. I love being in the gym. Other than that, I don’t really do too much. I’ve got a girlfriend. Everywhere I go, I’m walking around with a smile on my face and willing to help out anybody."

Desmond Bane is the son of Marrissa and Etieno Ekiko. After he was born,  his mother and his sister often moved around, living with relatives because his mother was young and not prepared for the demands of parenting. 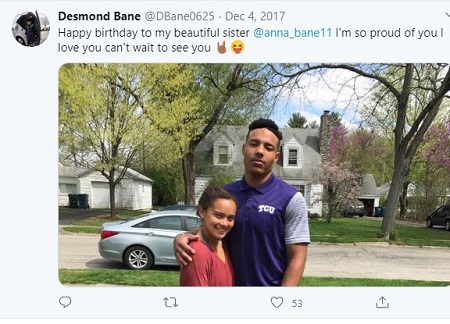 When Bane turned two years old, he started living with his great-grandparents, who raised him in Richmond, Indiana for the rest of his childhood. By his 13, he discovered that his father lived in Nigeria.

Initially, Bane focused on baseball until eighth grade, with his great-grandfather coaching at the youth level, and also played football and soccer as well. later, he got into basketball and averaged a state-high 30 points, 11.5 rebounds, 6.1 assists and 3.2 blocks per game as a senior at Seton Catholic High School. Bane committed to play college basketball for TCU.