Pablo Sarabia is a well-known Spanish professional football player. He is currently playing in the Portuguese football league for the Sportin Liston. Sarabia spent his youth career in Real Madrid and has a contract with the Paris Saint-Germain in League 1. Sarabia plays as an attacking midfielder for his team and country.

Pablo Sarabia was born Pablo Sarabia Garcia on May 11, 1992, in Madrid, Spain. He did not come from a reputed family so, much about his parents and early life is still under the radar. Sarabia did not continue his formal education and stuck to football in his early days. Pablo stands five feet and ten inches tall and weighs 70 kg.

Pablo Sarabia has an estimated net worth of more than $10 Million. He credits most of his net worth to his successful career in football. Pablo has been playing professional football for almost ten years. Sarabia has an annual salary of £4,576,000 with the PSG. The player earns a weekly wage of £88,000. 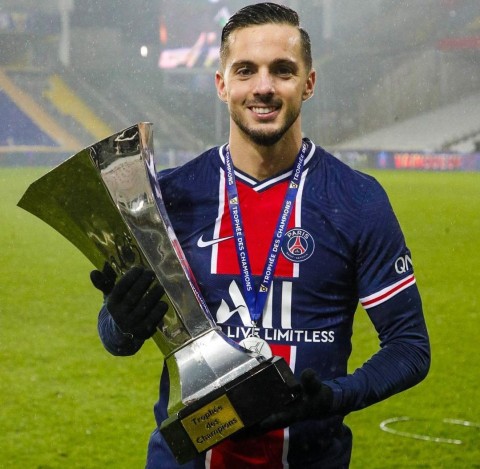 Pablo shares a photo with his title in PSG SOURCE: [email protected]

Pablo is an active social media user. He keeps posting photos of his games and girlfriend. Sarabia is dating his longtime girlfriend, Carmen Mora. The love birds have been together for some time. The player has successfully kept his girlfriend away from the spotlight.

A Decade Long Career In Football: Real Madrid to PSG

Pablo started playing football in 2000 and joined EFMO Baodilla youth club and trained until 2004. He moved to Real Madrid youth club and remained with the team until 2009. In 2009, Sarabia made his senior team debut for the Real Madrid B team and scored fifteen goals in the next two seasons. In July 2011, Getafe signed Pablo for a five-year contract with a reported fee of around €3 million.

Sarabia had a splendid season with the club and scored ten goals while appearing in 131 games for the club. In 2016, Sevilla signed him a four-year deal after Getafe got relegated. In his next-three season, He appeared in 101 games and scored twenty-six goals. In July 2019, PSG signed a five-year contract with the player. He was an integral team member when PSG won the 2020 Coupe de la Ligue Final.

After spending a good season with the PSG, and the arrival of players like Messi, Ramos, He moved to Sporting CP for a season loan.

Pablo represented Spain in numerous divisions and made his senior team debut in 2019. He played from U16 until U21 and has sixteen international caps in the international games. Sarabia will be playing for the team in the coming tournaments.