Max Kilman is a rising English professional football player. He is currently playing in the English Premier League for the Wolverhampton Wanderers. Max plays as a defender for his club and country. Kilman has been playing at the professional level since 2015.

Max Kilman was born Maximilian William Kilman on May 23, 1997, in Chelsea, England. He is the son of Alex Kilman and his wife, Maria Kilman. Max holds Ukrainian descent and also speaks Russian. Talking about his physical appearance, Kilman stands six feet and four inches tall and weighs 80 kg.

Max started playing football from a very early age in the youth academy of CM Futsal Academy. He later gave a trial with Fulham United and trained with them. Also, Kilman was part of Gillingham United youth academy for a very short time. The player earned his senior team call for Welling United in 2015 but moved to Maidenhead United and debuted. 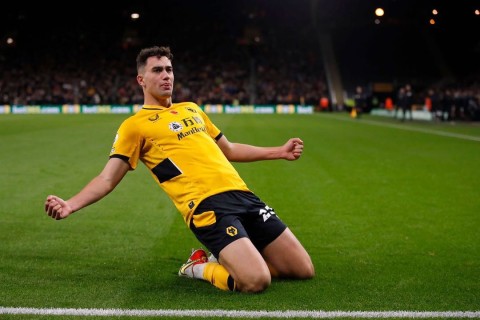 Max celebrates after scoring a goal in a Premier League SOURCE: [email protected]

In late 2018, Premier League club Wolverhampton signed him for an undisclosed transfer fee. He spent his early seasons playing for the U-23 team. In May 2019, The player earned his senior team call and debuted against Fulham. Kilman started against FC Pyunik in the 2019-20 UEFA Europa League in a full game. In April 2020, Max extended until the summer of 2022. The same year, Wolves announced that Kilman had extended his contract with the club until the summer of 2025.

Kilman has appeared in thirty-four games and scored one goal in his two senior seasons with the club. In November 2021, The player signed a new long-term deal with Wolves until 2026.

Max is very much private about his personal life. Although He is an active social media user, His timeline is filled with photos of his games and training. There is no rumor of the player dating anyone in the public. Kilman is believed to be single as of early 2022. The player must be focusing on his career.

Salary, Earnings and Net Worth

Max Kilman has an estimated net worth of more than $2 Million. He has earned most of his net worth through his salary and contract with Wolverhampton. As per sources, Max has an annual salary of £780,000. He will receive the same amount until 2026. Kilman has a weekly wage of £15,000. Max has signed a contract worth £4.6 Million.