Chris Quinn is a well-known American former professional basketball player. Chris has been working as the assistant coach in the National Basketball league for the Miami Heat. He was the runner-up for Mr. Basketball honors in Ohio as a senior, finishing behind NBA star LeBron James.

Chris Quinn was born Christopher James Quinn on September 27, 1983, in New Orleans, Louisiana. He is the son of Susan Quinn and her husband, Chris Quinn. Chris graduated from Dublin Coffman High School and enrolled at the University of Notre Dame. Quinn stands six feet and two inches tall and weighs 79 kg.

Chris Quinn has an estimated net worth of $5 Million. He has been working as an assistant coach for the Miami Heats for more than eight years. Chris also played in the NBA for seven seasons. Quinn signed a $2 million contract with the Miami heats in 2006. He earned $412,718 in his first year with the team. 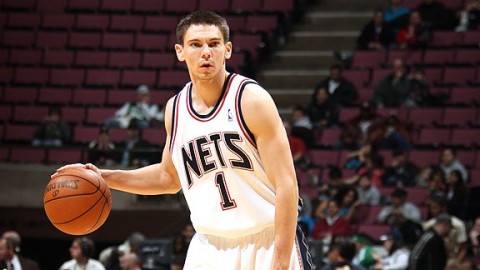 Chris played in the NBA for seven seasons SOURCE: NBA

In the 2009/10 season, Chris moved to Brooklyn Nets and signed a one-year deal worth $1.055 Million. In the following season, He earned $861,978 from his contract with San Antonio Spurs. Quinn played for the Cleveland Cavaliers for his final NBA season and made $169,339 as his salary. The former NBA player joined Northwestern University as their assistant coach shortly after his retirement. The salary of an assistant coach currently working in the NBA ranges from $100,000 to $1 Million. Kenny Payne is one of the highest-paid NBA.

Chris is married to his longtime girlfriend, Lauren Quinn. The love birds tied their wedding knot in the late 2000s. They had a private wedding ceremony where they invited only a few members from both the families and some close friends. Nothing much about their first meeting instance is shared in the public.

Chris and Lauren welcomed their first child, Charlie, in 2012. Unlike another former player, Chris does not show much presence in social media and has successfully kept them away from the spotlight. In 2014, The duo was blessed with their second child, Lydia. As Quinn remained out of the house for his job, Lauren remained at home looking after their children.

Chris played basketball for his High Schoola, set 14 school records, and named Columbus Dispatch Player of the Year in 2002. Quinn led his team to back-to-back conference championships. He finished his University career averaging 14.6 points, 3.5 assists, 2.7 rebounds, and 1.27 steals per game. Quinn was not drafted in the 2006 NBA draft and signed a partial contract with the Hets.

Chris moved to the Philadelphia 76ers in 2010 but was moved to the San Antonio Spurs at the end of the season. In 2011, Quinn moved to Europe and played for numerous leagues. In 2013, the Cavaliers signed him for the season and announced his retirement at the end of the 2013 season. Northwestern University offered him to work as their assistant coach, and the following season, Heats signed him as their new assistant coach.