If you love watching NBA games, then. Kenny Payne must not be a new name. Payne is a well-known American professional basketball coach and a former player. Kenny currently works as the assistant coach for the New York Knicks. Payne played in the NBA for more than eleven as a Small Forward.

Kenny Payne was born Kenneth Victor Payne on November 25, 1966, in Laurel, Mississippi. He rose to fame only after his career so, much information about his parents and early life is under the radar. Payne graduated from Northeast Jones High School and enrolled at the University of Louisville. Payne stands six feet and eight inches tall and weighs 88 kg. 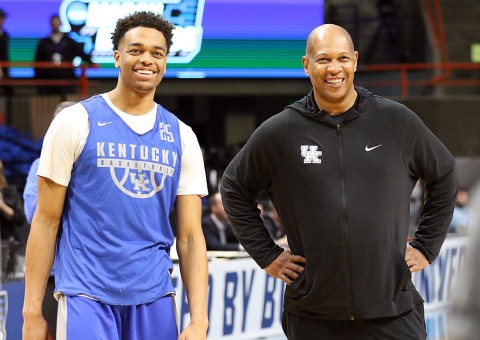 Kenny worked with the University of Kentucky as an assistant CoachSOURCE: 247sports.

Payne played professionally in several other leagues globally. He finished his playing career in 2000 while playing his last season with the Cairns Taipans in the Australian professional league. In 2004, the University of Oregon signed him as their assistant coach. He worked with the team until 2009 and moved to the University of Kentucky. In 2012, Payne was part of the NCAA Champion team as their assistant coach.

In 2020, New York Knicks hired Payne as their new assistant coach. Many reporters suggested that he start working for the University of DePaul but have extended his contract with the Knicks.

Kenny is the proud father of two children. Payne married his longtime girlfriend, Michelle Payne, in the 1990s. Shortly after the wedding, Payne and Michelle welcomed their first child, Alexis, on March 11, 1998. In March 2000, they family of three extended to four after Alexander's birth. Payne is living a happy married life along with his wife and their children.

Kenny Payne has an estimated net worth of more than $5 Million. Payne has earned much of his net worth through his career in the NBA as a player and working as an assistant coach since 2004. As per sources, Kenny earned $1.5 Million from his four years with the NBA.

Kenny earned $800,000 as his annual salary, working as the assistant coach with the University of Kentucky. In 2018, Kentucky extended their contract with Payne for three years with a base salary of $900,000, which was more than nine NCAA Tournament head coaches. In 2020, the Knicks hired him as their new assistant coach with over $1.5 Million in salaries.