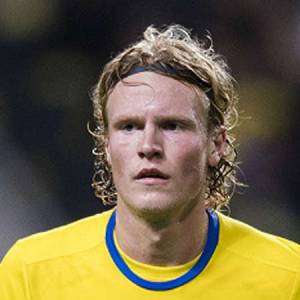 Oscar Carl Niclas Hiljemark is a Swedish international football player who is well recognized as Oscar Hiljemark. The young talent currently plays for Italian club Genoa as a midfielder, wearing the jersey no, 88.

Hilijemark also plays for his national side “Sweden national team”, having made international debut in the year 2012.

A native of Gislaved, Sweden, Oscar Hilijemark was born on 28th June 1992, to Lena Hiljemark and Niclas Hilijemark. His birth sign is Cancer. Talking about his nationality he is Swedish.

Oscar was raised alongside his two younger sisters Anna Hiljemark and Elin Hiljemark.

Oscar had a keen interest in football since his childhood, thus, he started off playing football for Gislaveds IS. He was offered by many clubs in Sweden in his youth but he chose to join IF Elfsborg, at the age of sixteen.

As a young player, Oscar also represented internationally Sweden in many team camps and was predicted a great career for his mature style of play.

Oscar Hiljemark's Net Worth and Endorsement

The significant source of Oscar’s earning is his club contract, salary from the national team as well as endorsement and sponsorship. Presently the footballer is signed to Genoa where he gets paid $34,381 as his weekly salary which is around $1.7 million per annum.

As of 2018, Oscar has an estimated net worth around $2.5 million. His market value is $4.34 million and his total transfer procedure is recorded $9.31 million.

Big up to @biliagroupgoteborg , we're riding in style this summer! ??????

Oscar is living a lavish lifestyle with a tremendous net worth. He owns several luxurious cars including Mercedes and has posted many pictures posing with them on his Instagram.

At his eighteen, Oscar was promoted to the senior team after playing two years with Elfsborg’s youth system. On 26th September 2010, he made his debut in a 2-2 draw at IF Brommapojkarna. His first goal for the club came on 27th June 2011, in a match against Syrianska FC in a 2-1 home win.

Oscar was nominated a newcomer of the year, being the youngest of the nominated. He also earned the Manadenas Tipselitspelare prize.

Following his successful debut (2011) season, Oscar was scouted as well as offered by clubs including Club Brugge and Genoa nevertheless, Elsfborg ignored the proposals, as they want Oscar to play few more.

On 4th January 2013, Oscar moved to PSV signing a 4-year contract for a fee of $2.70 million. On 26th January, he made his debut against Heracles Almelo in a 5-1 victory. On 17th August, he recorded first goal side PSV in a substantial 3-0 win over Go Ahead Eagles.

He just played two seasons for PSV where he made 49 appearances for 2 goals.

Oscar next signed a 4-year contract with Italian club Palermo for a reported fee of $2.46 million plus $613,950 in add-ons. On 13th September 2015, he scored first Serie A goal in a 2-2 draw against Carpi. Again on 19th September, he recorded a brace against Milan which ended in a 2-3 loss.

On 26th January 2017, Oscar was loaned out to Genoa with an option to sign permanently. In next season he signed with the club.

On 30th September, he scored his first coal against PAS Giannina in a 2-0 home Super League Victory side Panathinaikos.

On 30th January 2018, he returned to his parent club, terminating his loan spell by mutual consent between the Genoa and Panathinaikos.

Oscar Hiljemark has represented Sweden internationally both in junior and senior level, playing in various tournaments. He was a part of Sweden U17 and U19 national team.

On 18th January 2012, he made his international team debut for Sweden in a friendly match against Bahrain, scoring his first goal for his national side. On November 2015, he was named for the UEFA Euro 2016 qualifying play-offs against Denmark.

Oscar was announced to 23 senior squads for Euro 2016 campaign along with Mikael Lustig, Martin Olsson, Albin Ekdal, and Ludwig Augustinsson.

Till date, Oscar has won 18 caps and scored 2 international goals for his country.

25, handsome hunk, Oscar is neither married nor single. Currently, he is in an open relationship with his longtime girlfriend Elin Wass. The two are living together since 2014 along with his dog Milo.

The lovebird spent quality time with each other. They often visit worlds mesmerizing holiday destination together in their vacations. If we analyze his Instagram account, it is full of their romantic pictures.

Adding up, Oscar stands 6 feet 1 inch tall and has a perfect weight of 73 Kg.