Nikola Mirotic is a Montenegrin-Spanish professional basketball. As of 2018, Mirotic plays for the New Orleans Pelicans of the National Basketball Association (NBA).

A two-time All-EuroLeague Second Team member, Mirotic plays as a power forward. Previously, he played for the teams including Real Madrid and Chicago Bulls. Mirotic is married to his girlfriend Nina Vujacic and has a son from their relationship.

Nikola Mirotic was born on 11th February 1991, in Podgorica, Montenegro. However, Mirotic hasn't revealed any information about his parents and siblings yet. He grew up in Europe and during his childhood, Mirotic had a passion for football. 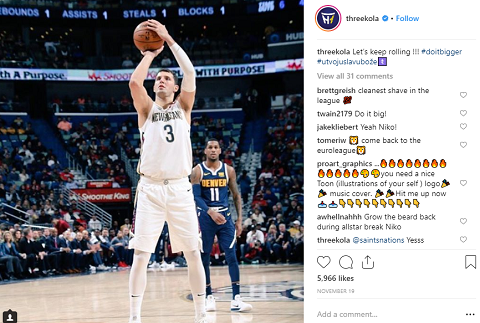 Mirotic was introduced to the sport of basketball by his grandfather when he was 13 years old. Mirotic belongs to a Montenegrin-Spanish nationality. Mirotic attended Joker School in Podgorica.

In the summer of 2005, Nikola Mirotic signed a junior contract for Real Madrid. He played his junior career for two years from 2006 to 2008 and signed for senior team of the Liga ACB in 2008. Mirotic won Spanish King's Cup and the Spanish Supercup with the team.

Houston Rockets drafted Mirotic with the 23rd overall pick in the 2011 NBA draft but he was later traded to Minnesota Timberwolves and again to Chicago Bulls. While playing for Real Madrid, Mirotic was a two-time All-EuroLeague Second Team member. Later, on 18th July 2014, Mirotic signed for Chicago Bulls.

Mirotic scored his career-high 27 points on 19th December 2014. He played the regularly for Bulls until 2017–18 season. On 1st February 2018, Mirotic was traded to New Orleans Pelicans in exchange for Omer Asik, Tony Allen, and Jameer Nelson. Moreover, Mirotic is also a member of the National Basketball team.

Nikola Mirotic is a married man. Mirotic is married to his long-term girlfriend Nina Vujacic. The couple exchanged their vows in June 2012. His spouse Nina is the daughter of former coach and mentor, Jadran Vujacic. 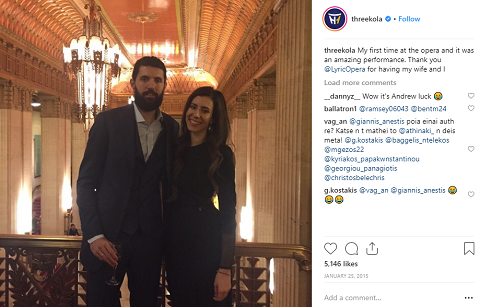 From their relationship, the husband and wife are blessed with a son Aleksandar Mirotic born May 2013. The duo is still together since their wedding and is going strong in their relationship. Mirotic frequently shares photos of his wife on his Instagram and Twitter.

To date, the pair hasn't been the part of controversy regarding their divorce and extramarital affairs. Besides this, Mirotic hasn't been in any other relationships in past.

Nikola Mirotic Net worth and Salary

Currently, Nikola Mirotic has an estimated net worth of $22 million. From his career as a professional NBA player, Mirotic earns a tremendous amount of money. Starting his professional career at the age of 14, Mirotic is still active in the same field.

Mirotic previously played for the teams including Real Madrid and Chicago Bulls. Currently, Mirotic plays for the New Orleans Pelicans. Mirotic previously signed a two-year contract with Bulls for $15 million which included an average annual salary of $7,500,000 and the base salary of $12,500,000. On the other hand, Mirotic further adds money from his National Basketball team career.