Playing as a Shooting Guard, Ian Patrick Clark reportedly earns around $1,757,429 as his yearly salary from New Orleans Pelicans and has an estimated net worth of over $4 million.

Ian Patrick Clark was born on March 7, 1991, in Memphis, Tennessee to parents Jon Clark and Shelbia Clark. He is American by nationality and belongs to Black ethnic group. Further, his star sign is Pisces. He spent his childhood with his brother Chris Clark.

After completing high school, Ian enrolled at the University of Belemont and played there. When Clark registered as a freshman at Belmont University in 2009–2010, the school was still at the Atlantic Sun Conference (A-Sun).

Ian immediately became freshman of the year and was appointed to the A-Sun Second Team. He had an average of 14.9 points and 3.3 rebounds per game and was named by CollegeInsider.com as the Mid-Major Freshman All American. 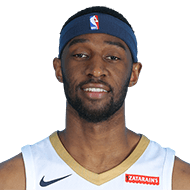 In the 2013 OVC Championship game, Clark outdated 2012 OVC Player of the Year and the All-American consensus, Isaiah Canaan, with the Bruins 70–68 in overtime. For the year, he had an average of 18.2 points, 3.3 rebounds, 2.4 assists, and 1.6 steals, and 45.9 percent from beyond the arc, which was good enough to be ranked third in the country.

As of 2018, Ian Patrick Clark has an estimated net worth of over $4 million. He reportedly signed a 1-year contract worth $1,757,429 with New Orleans Pelicans.

After being undrafted in the 2013 NBA draft, Ian signed to play for the Miami Heat and the Golden State Warriors in both NBA Summer Leagues. He then won the most valuable player in the championship game of the Las Vegas Summer League, leading the Warriors with 33 points, helping them to defeat the Phoenix Suns 91-77.

Clark signed with the New Orleans Pelicans on 3 August 2017.  He scored a season high of 20 points in a loss of 114–103 to the Sacramento Kings On 30 January 2018. Moreover, Ian has played for many other clubs like Utah Jazz, Bakersfield Jam, Idaho Stampede, Denver Nuggets, Golden State Warriors.

Undrafted to a Champion. Dreams can still come true!

Some of the teammates of Ian from New Orleans Pelicans are Frank Jackson, Wesley Johnson, Darius Miller.

The Famous NBA star Ian is 6 feet 3 inches tall in height and weighs around 79 kg. Clark is not only a world-class athlete but also a very attractive individual.

Other than being a famous NBA Shooting Guard, Ian Patrick Clark is pretty famous in social media. He has 2014k followers on Instagram and 43.1k followers on his Twitter account.

Clark is obviously pleased to keep a low profile when it comes to his personal life. There isn't any information about his relationship and affairs. In addition, Ian appears to be focuse d on building his career and has kept his romantic relationship hidden from the general public.