Nikola Jokic is a Serbian basketball player who plays as a center/power forward for the Denver Nuggets of the National Basketball Association. Internationally, he also represents the Serbian national basketball team.

The 2014 NBA draftee, Jokic has a whopping net worth of $30 million. Furthermore, the hunk is neither single nor married, currently, he is dating girlfriend, Natalija Macesic.

Nikola Jokic Net Worth and Salary

He has maintained a fortune of bank balance from his career salary. As of 2016, his salary was $1.3 million.

Nikola Jokic Personal Life; Who is his Girlfriend?

Nikola Jovic is not married yet. Currently, he is in an open relationship with his girlfriend Natalija Macesic with whom he lives in Denver. The couple first met each other in the hometown of Sombor. Natalija later moved with Jokic. 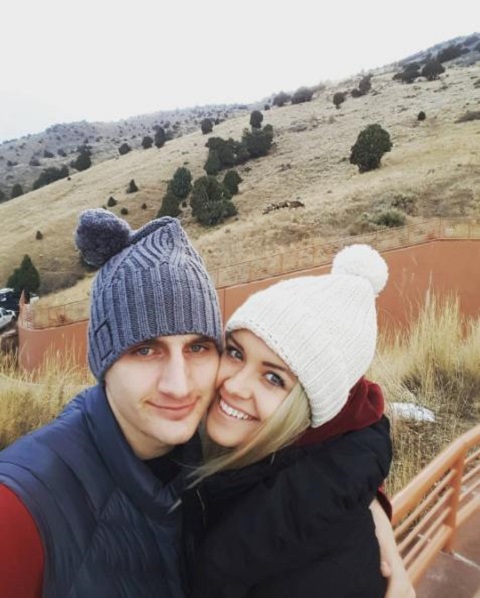 She also often goes together with him when he has to play outside Denver.

Nikola Jovic has two older brothers named Nemanja and Strahinja. His brother Nemanja played college basketball at the University of Detroit Mercy. Both of his brothers are a close friend to former NBA player Darko Milicic.

Nikola Jokic was born on February 19, 1995, in Sombor, Serbia, FR Yugoslavia. Regarding his nationality, he is Serbian. His ethnicity is unknown at this time. His birth sign is Pisces. He is not the single child of his parents.

Nikola Jokic has not mentioned from where he received a formal education. In the summer of 2012, he agreed on a contract with Mega Vizura.

On Nov 28, 2015, he played his best game with 23 points and 12 rebounds in a 109-98 loss to the San Antonio Spurs. At the end of the season, he became third in the 2016 NBA Rookie of the Year and bagged NBA All-Rookie First Team honors. He was behind Karl-Anthony Towns and Kristaps Porzingis in Rookie of the Year votings.

Nikola Jovic was the part of the Serbian U-19 national basketball team that won the silver medal at the 2013 World Championships.