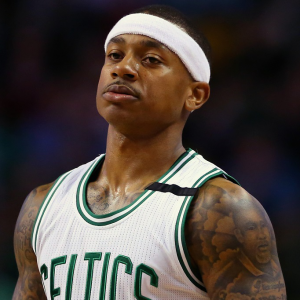 He has an estimated net worth of $20 million at current with an annual salary of $2 million. Further, he is married and has three children with his wife.

Isaiah Thomas Net Worth and Endorsements

Isiah Thomas has an estimated net worth of $20 million, mostly earned through his NBA career. Further, the NBA star has made $32,205,309 as his career earning.

Apart from his earnings from basketball career, he earns massive amounts through his several endorsing deals. He is linked with brands like Nike, Sneakers, Boss, etc. As for riding, he owns cars like Bentley continental and Range Rover. He resides in a house worthing $1.4 million which was bought in 2014.

28, Isaiah Thomas is a happily married man. He got married to his high school sweetheart Kayla Jasmin Wallace. After decades of their relationship, the couple got engaged in June 2014. After two years of their engagement, they decided to tie their knots in August in his hometown.

Alike Thomas, Kayla Wallace is originally from Tacoma, Washington. She graduated from Central Washington University with a major in arts in education.

Merry Christmas to ALL from the Thomas family!!

The couple together has two sons and a daughter and is often spotted hanging out together with their family. The couple is living a blissful life without any disputes or divorce rumors.

Isaiah Thomas was born on 7th of February 1989, in Tacoma, Washington, to James and Tina Baldtrip. Regarding his nationality, Thomas is an American and belongs to white ethnicity.

He was named after former Detroit Pistons Hall of fame point guard Isiah Thomas but instead on spelling it Isaiah as she preferred a biblical name. As a kid, Thomas had the nicknames Zeke from his mother whereas his father nicknamed him “Bighead”.

Thomas grew alongside his younger sister Chyna who lost her life in a car accident on Interstate 5 in Federal Way, Washington on 15th April 2017.

Isaiah Thomas enrolled at Curtis Senior High School in University Place, Washington, and then was transferred to South Kent School where he graduated in 2008. During his high school career, Thomas averaged 31.2 points as a junior.

Upon his graduation, Thomas chose the University of Washington. He wore jersey no. 2 which was previously put on by former Washington Huskies star, Nate Robinson. In his junior year, Thomas was named first team All-Pac-10.

He finished his college career, playing total 105 games with average 16.4 points, 4.0 assists, and 3.5 rebounds per game.

Thomas was selected 60th by the Sacramento Kings in the second round of the 2011 NBA draft. On 19th February 2012, he recorded his very first double-double with 11 assists and 23 points against the Cleveland Cavaliers.

On 12th July 2014, Thomas was transferred to Phoenix Suns in a sign-and-trade deal which also sent the rights of Alex Oriakhi to his previous club, Kings. He made Suns debut in the team’s season-opener against the Los Angeles Lakers where he recorded 23 points, 3 assists, and 1 rebound in a 199-99 victory.

However, he missed 8 games due to an ankle injury. On 12th December, he made his comeback against Detroit Pistons where he scored 10 points in the club’s 103-105 defeat.

On 19 February 2015, Thomas was traded to the Boston Celtics in exchange for Marcus Thornton. On 22nd February, he made his Celtics debut against the Los Angeles Lakers in a 118-111 overtime defeat. On 8th April, he scored a season-high 34 points in a 113-103 victory against the Detroit Pistons.

In his second season, he was the lowest draft pick to be named an All-Star since the NBA draft was reduced to 2 rounds in 1989. He finished the second season playing total 82 games. He averaged total 22.2 game point, 6.2 assist, 3.0 rebounds, and 1.1 steals per game.

On 22nd August 2017, Thomas was traded along with his mates Brooklyn Nets, Ante Zizic, and Jae Crowder to the Cleveland Cavaliers in exchange for Kyrie Irving.