Nik Stauskas is a Canadian professional NBA Player player who plays in the National Basketball Association (NBA). As of 2019, Nikolas Tomas Stauskas currently plays for the Cleveland Cavaliers as their Shooting Guard. Nikolas Tomas Stauskas has played for other teams like Brooklyn Nets, Sacramento Kings, Portland Trail Blazers and Philadelphia 76ers.

Nik Stauskas Salary and Net Worth

Nikolas Tomas Stauskas so far has made earnings of $14,036,882 from his entire NBA career.

Other than being a famous NBA Shooting Guard, Nikolas Tomas Stauskas is pretty famous in social media.

Nik Stauaskas dated Taylor Anderson which lasted for a few years but the couple later separated in around 2015.

He then started dating Alexandra Brynn. After dating for about a year, the couple got engaged in 2018. The couple isn't married yet but might be planning to tie the knot soon.

Nikolas Tomas Stauskas was born on October 7, 1993, in Mississauga, Ontario to parents Paul Stauskas and Ruta Stauskas. As per his nationality, he is Canadian and belongs to Lithuanian heritage. Further, his star sign is Libra. He grew up along with his siblings, Peter Stauskas. 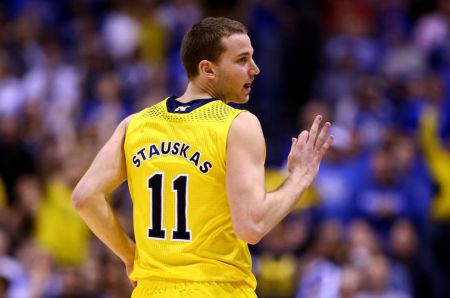 After completing high school, Nikolas Tomas Stauskas enrolled at the University of Michigan and played for the Michigan Wolverine Men's Basketball.

Stauskas signed a rookie scale contract with the Sacramento Kings on July 8, 2014. Stauskas was a starting member of the Summer League Champions during the 2014 NBA Summer League.

Stauskas was traded to the Philadelphia 76ers on July 10, 2015. During this period he played against the Utah Jazz and won with a 12-point debut performance. On December 1 their team defeated the Los-Angeles Lakers by 109 – 91. He was injured while playing against the Chicago Bulls on January 15.

Stauskas made a new career record on March 18 against the Oklahoma City Thunder by scoring 23 points. On March 4 he posted a career-high 24 points while playing against Detroit. Stauskas was traded again to the Brooklyn Nets on December 7, 2017. He scored a team-high 22 points against the Toronto Raptors and won by 120 – 87.

Furthermore, Stauskas was traded to the Cleveland Cavaliers along with Wade Baldwin IV and two second-round picks for Rodney Hood on February 4, 2019.

Facts and stats of Nik Stauskas