Nick Sirianni is an American football coach currently serving for the Philadelphia Eagles of the National Football League (NFL) as their head coach appointed in 2021. Early in his career, he served as the offensive coordinator for the Indianapolis Colts.

Jamestown, New York native, Nick Sirianni was born on 15th June 1981, under the star sign Gemini. The thirty-nine years old holds an American nationality and is of white ethnic background.

The year 2021 turned out to be the luckiest year for coach Nick Sirianni since the beginning of the year gifted him the most awaited position, the head coach for the Philadelphia Eagles. Everything is public except the monetary contract details. His salary at Philadelphia Eagles is under the shades.

According to the source, the average NFL head coaching salary is roughly $6 million to $7 million, but it could climb to as high as $10 million. Hence, Sirianni's salary can expect no less than the seven-digit figure.

Early in his career, Sirianni had a stint as wide receiver coach, quarterback coach, and offensive quality control for various NFL teams, earning a good deal of money. As of 2021, his net worth is approximately $3 million.

Nick met his future wife, Brett in Kansas City where he was coaching and Brett was teaching. Though the duo lived in the same apartment complex and ran into each other a few times, they did not cross each other.

In their love story, Brett's sister played the key role who convinced her to go out with the coach and Nick won her over. The pair dated for two years and got engaged before the inevitable happened. When Nick got hired by the Chargers in 2013, Brett finished out the school year in Kansas City. They got married that summer, went on their honeymoon, and drove out to San Diego to start their life together. 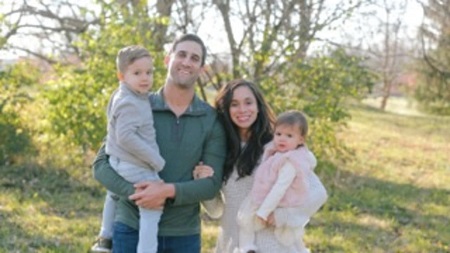 Mr. and Mrs. Sirianni spent five years in San Diego and welcomed their son. Just before their daughter was born, the Chargers relocated to Los Angeles and they followed, settling down in Orange County.

Nick Sirianni started his caching career at his alma mater, Mt. Union serving as a defensive back coach. Later, he progressed to IUP (2006-2008). In 2009, he joined NFL working as an offensive quality control coach for Kansas City Chiefs where he progressed from Assistant quarterback coach to Wide receiver coach between (2009-2012). 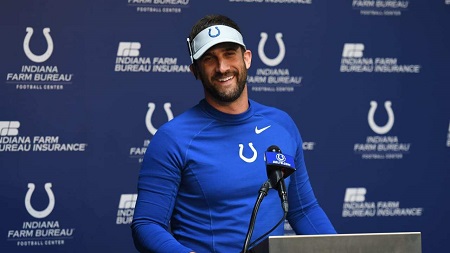 In 2013, he switched to San Diego Chargers as offensive quality control coach and then held the position of quarterback coach from 2014-15 and then wide receiver coach (2016-17). In 2018, he joined Indianapolis Colts to become offensive coordinator. On 21st January 2021, he was hired by the Philadelphia Eagles as their new head coach.

Sirianni was born to Fran and Amy Sirianni. His father and his brother Jay are both former head coaches of Southwestern, and his brother Mike Sirianni, 48, currently serves as the coach of the Washington & Jefferson College.

He enrolled at the Southwestern Central High School in Jamestown, New York, graduating in 1999. Then he attended the University of Mount Union.