Kevin Stefanski is a professional American football coach who holds the position of head coach at Cleveland Browns in the NFL. In 2020, he led the Browns to their first playoff appearance since 2002.

He is also a former player who played as a defensive line and was selected in All-Ivy League twice.

Kevin Stefanski was born on May 8, 1982, in Philadelphia, Pennsylvania, US. His zodiac sign is Taurus and his height is 5 feet 11 inches. His father's name is Ed Stefanski, who is a professional American sports executive. He was a former basketball player and was drafted in 1976. Kevin's mother's name is Karen Stefanski and he has 3 brothers - Eddie, Matt, and David Stefanski.

Ed's son Kevin went to St. Joseph's Preparatory School and graduated in 2000. Later, he graduated from the University of Pennsylvania in 2004. There, he played as a defensive line for Penn. That team was one of the best in Penn's history which was undefeated at that time.

Later, in 2006, he joined Minnesota Vikings as an assistant director of football operations. He worked there for 14 years and later joined Cleveland Browns as a head coach in 2020.

Net worth and Contract with Cleveland Browns

According to sources, Kevin Stefanski has an estimated net worth of $10 million. He gained most of his income from being part of the coaching team at Minnesota Vikings.

The 2020 Coach of the Year by PFWA must have earned a handsome amount of money in Minnesota. After all, he worked there for nearly 1 and a half decades. As per Sports Show, Stefanski makes over $6 million as his base salary at Cleveland. In addition, he will also have more bonuses and incentives if he leads the team to playoffs or wins Super Bowl LIV.

The 2020 NFL Coach of the Year is also partnered with various brands and endorsements. As of 2021, Stefanski is just 39 years old and has a long career ahead, and can earn even more in the future.

He lives a respectable lifestyle with his wife and children.

Read about Vic Fangio's Net worth and Family

Stefanski's Relationship with Michell and his kids

Kevin Stefanski is living a happy married life with his long-time girlfriend Michelle. The pair dated for few years before tying their knot. 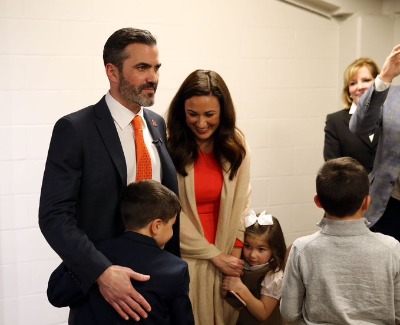 Kevin Stefanski, his wife Michelle and their children SOURCE: https://www.cleveland.com/

However, no information regarding his relationship with his wife is in the public. And there are no sources that say the couple is having trouble in their marriage. So, Kevin must be living a happy life with his sweetheart Michelle.

Kevin and Michelle are blessed with 3 children, Will, Juliet, and Gabe Stefanski.