Nemanja Radonjic is a Serbian professional football player who currently plays for Red Star Belgrade. The football winger was in the 2017-18 Serbian SuperLiga Team of the season as well as won Serbian SuperLiga with Red Star. He penned his first official contract with Roma and made his official football debut with Cukaricki during his loan spell.

Since 2017, Radonjic is in the Serbia national team and has been capped four times without scoring a goal. He has also been included in the 23-man squad for the FIFA World Cup and made his debut in 1-2 loss to Switzerland.

Nemanja Radonjic was born on 15th February 1996, in Niš, FR Yugoslavia. His star sign is Aquarius. By nationality he is Serbian and his ethnicity is unknown. Radonjic has not revealed any personal information about him. Hence, the public is curious to know his childhood, parents, siblings, and academic qualification.

Radonjic’s annual salary from Red Star is estimated to be around €1 million. As of 10th January 2018, his market value is recorded at around £2.25 million. Also, he has an endorsement deal with Nike which is also his income source.

He can be seen promoting Nike on social media posting various photos of his shoes designed by Nike. 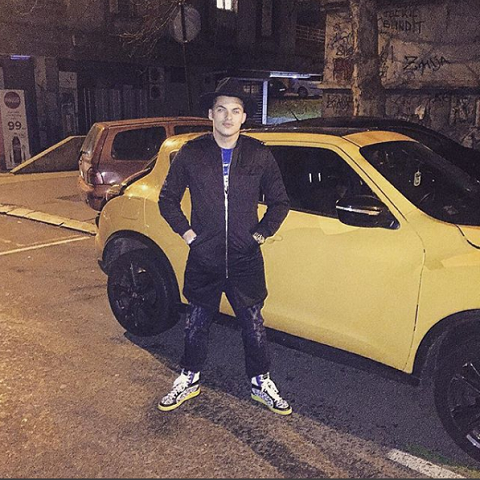 As of 2018, his net worth is under review but is estimated to be more than $1 million. The young Serbian star owns a yellow Nissan car worth around $30,000 and often drives in it.

The young talent made his first football steps playing for the local club Zeleznicar Nis and Medijana. Further, he switched to youth academy of the club Radnicki Nis. Next, he moved to Partizan and remained several months before joining Viitorul Constanta.

In 2014, Radonjic signed a five-year contract with Roma and soon was loaned to Cukaricki for a one-season. He scored a goal for Cukaricki on his debut match in the Serbian SuperLiga. Playing with Cukaricki, he amassed 31 appearances and scored four goals in all competitions until the end of the 2016-17 season.

On 21 July 2017, Radonjic penned a five-year contract with Red Star Belgrade, being officially loaned until summer 2019, when his deal with Roma will end. He made his Red Star debut in the first game of the 2017–18 UEFA Europa League against Sparta Prague in the third qualifying round, where he entered replacing Ricardo Cavalcante Mendes in the 61st minute of the match.

In the second game of the play-off round for UEFA Europa League, he scored his first goal for the team in 2–1 victory against Krasnodar. His second goal for the Red Star came in 1–1 draw to BATE Borisov on 14 September 2017.

In May 2018, Radonjic was voted the best 11 players for the 2017–18 Serbian SuperLiga season, by clubs managers' and captains' choice.

Nemanja Radonjic was a team member of Serbia U17, U18, U19, U20 and U21 national team. In November 2017, he earned his first call-up to Serbia senior football team for an Asia tour by caretaker Mladen Krstajic.

On 14 November 2017, Radonjic made his international debut for Serbia in a friendly draw to South Korea, where he entered in 81 minutes of the match, replacing Andrija Živkovic. In May 2018 he was included in Serbia's preliminary squad for the 2018 FIFA World Cup along with his teammates Vladimir Stojkovic, Antonio Rukavina, and Luka Milivojevic.

Currently 22, Nemanja Radonjic might be in a relationship with his girlfriend but no co concrete evidence is available. Analyzing his Instagram, we can even doubt that the player might be in multiple relationships.

Radonjic can be seen with various girls on his Instagram posts. He has posted photos where we can see him kissing different beautiful girls.

Radonjic is an animal lover. He owns a Corgi puppy named Pacovce.

Apart from his love life, he seems to be an avid fan of legendary footballer, Cristiano Ronaldo. Radonjic often shares Ronaldo's photos in his official Instagram account.

Radonjic stands at the height of six feet and weighs around 76 Kg.