Nah'Shon Hyland is a rising American college basketball player. He played in the Atlantic 10 Conference for the Virginia Commonwealth University men's basketball team, VCU Rams. Nah'Shon is currently playing in his sophomore year. Hyland was awarded the Atlantic 10 Player of the Year in 2021 and also made into the First-team All-Atlantic 10 in 2021.

Nah'Shon Hyland was born Nah'Shon Lee "Bones" Hyland on September 14, 2000, in Wilmington, Delaware. He is among the two children born to Marshay Hayland and her husband. Hyland has an elder brother named Tykee. Nah'Shon Hyland graduated from St.Georges Tech in 2019 and then enrolled at Virginia Commonwealth University. Hyland stands six feet and three inches tall and weighs 78 kgs (173 lb).

Nah'Shon Hyland started playing basketball along with his older brother from a very early age. He remained out of the game in his junior year after expecting a house fire that killed his 11-month-old cousin and grandmother. As a senior, he averaged 26.6 points, 6.6 rebounds, 4.6 assists, and 3.4 steals per game, leading his team to the state tournament semifinals.

At the end of senior year, Hyland was named Delaware Player of the Year and earned first-team All-State honors. Universities like Saint Joseph's Rhode Island, Boston College, and several others approached him with athletic scholarships. However, Hh chose to play for the VCU as a four-star recruit.

Hyland started with the college team in his freshman year. In January, he scored a freshman season-high 21 points and five three-pointers in a 91–63 win over St. Bonaventure. At the end of his freshman year, he made it to the Atlantic 10 All-Rookie Team. Hyland shot 43.4 percent from the three-point range and set a program freshman record with 63 three-pointers. In December 2020, Nah'Shon posted a career-high 31 points in a 93–68 victory over Western Carolina.

Is Nah'Shon Hyland Dating? Know About His Relationship Status and Girlfriend 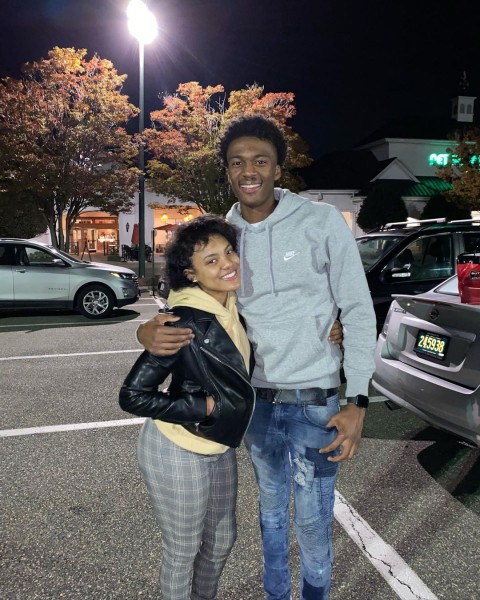 The love birds have been dating each other for more than a year. Hyland is very close to his family, and He spends his free time with his mother and brother.

Wilmington Native Hyland is very much early in his career. He is currently playing for the college basketball team. As per sources, It is illegal for a college player to receive any money to represent the team. They get athletic scholarships which help them to cover most of their expenses.

The scholarship for an athlete is more than $30,000 annually. Hyland is among the most anticipated point guard/ Shooting guard currently playing college basketball. If not this season then, We can see him putting his name for the 2022 NBA Draft. He is sure to sign million dollar contract with an NBA franchise.