The Basel-born defender and midfielder Milos Veljkovic boasts a noticeable physical presence with his 6 ft 4 in. Veljkovic currently plays for the National team of Serbia and a German sports club, Werder Bremen.

Veljkovic was honored with the UEFA European Under-19 Championship Team of the Tournament in  2013. He played as a defensive midfielder and central defender and preferred to play as a central defender during international football.

Milos Veljkovic was born on September 26, 1995, in Basel, Switzerland, to his Serbian parents. Veljkovic belongs to the white ethnicity and holds Swiss and Serbian nationality.

Veljkovic's current market value is estimated to be around €5.00 million. LIAN SPORTS is the agent of Milos Veljkovic. 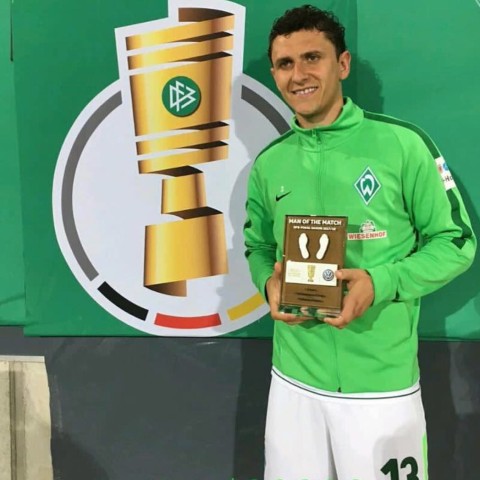 Veljkovic has used the shoe model of Nike Magista Opus II since July 10, 2017. He currently earns around £728,000 in annual salary. However, Veljkovic's exact net worth is not announced yet. Milos has an estimated net worth of more than $2 Million.

In 2013, Veljkovic was promoted to a senior team Tottenham Hotspur and made his Premier League debut on April 8, 2014, in a 5-1 win against Sunderland, replacing Paulinho. For the club, he played two games.

On October 16, 2014, Veljkovic was sent on loan to Middlesbrough for three months, where he made three appearances before ending his loan deal.

Veljkovic moved to Charlton on loan from Tottenham Hotspur in January 2015, where he played three games.

On February 1, 2016, Veljkovic was transferred to Werder Bremen with a fee of €330 thousand on a three-and-a-half-year contract.

On March 17, 2011, Veljkovic made his international debut with the Switzerland U-16 in a 2-2- draw against France in an international friendly.

Milos Veljkovic was a member of the U-20 team that won the 2015 FIFA U-20 World Cup. On November 10, 2017, he earned his first senior cap in a 2-0 win against China in an international friendly. He has been capped 21 times for his national team.

Veljkovic has been in a relationship with his girlfriend since 2013, but he hasn’t revealed anything about his partner in the media.

Veljkovic is active on Instagram with 60.7k followers. Velijkovic's height is 6 feet 2 inches, and his weight is 77 kg.