Mike Jensen was born in Herlev, Denmark, on February 19, 1988. He is the son of former Danish striker and manager of various Danish football clubs, Henrik Jensen. His father has also been a significant player for Brondby IF club and won the Danish Cup.

He started his career by joining the youth clubs of BK Rodovore and Brondy IF. 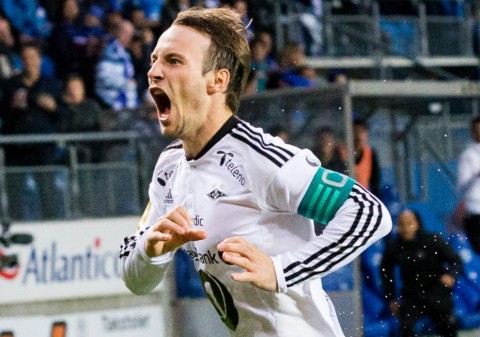 Mike has earned most of his net worth through football SOURCE: Norges Fotballforbund

He is the captain and significant player for Norway's top and best clubs, and his salary must be over 150K with a weekly wage to be more than €4500. His current market value is €1.7 million.

Interestingly, at the professional level, Jensen started his career at  Brondy IF  during the 2005/2006 season. His time at the club was successful as the team won the Danish Cup in 2007/2008. After three seasons with the Danish club, he was transferred to a Swedish football club, Malmo FF, on loan.

After appearing in only one season, the midfielder left the club for his current club, the Norwegian professional football club, Rosenborg.

He is currently the captain of the team. His performance at the club has been outstanding. He helped the team to win the Norwegian top league, Tippeligaen, in October 2015. 2015 proved to be an excellent year for both Rosenborg and Jensen as after only one month, the club won the Norwegian Football Cup against Sarpsborg 08 in the final.

He was instrumental in giving the victory to the team by scoring the deciding goal.

He won the Danish under -19 player of the year accolade in 2006 for his impressive play. He also represented Denmark in UEFA European Under-21 Championship 2011 in Denmark. He played alongside current Danish internationals such as  Christian Eriksen, Mathias Jorgensen, and Andreas Bjelland.

He started playing on the senior Danish Football Team in 2010. He was one of the key players that helped Denmark qualify for the 2018 FIFA World Cup in Russia.

Mike Jensen, a player at the Rosenborg, is also a captain of the Swedish premier club. His personal and private life is unknown as it seems he is focused more on his team, players, and coaches rather than being involved in any scandal.

One of the best footballers in the Norwegian club, Jansen's news or photos about his wife or girlfriends is unavailable.