Michael "Doc" Emrick a,k,a Mike Emrick is an American network television play-by-play sportscaster, as well as a commentator notable for his work in ice hockey. Currently, he stands as the lead announcer for NHL national telecasts on both NBC and NBCSN.

He is 6X Emmy Award winner and the first of only five to have to receive NHL's Lester Patrick Award for media work.

Mike Emrick Net Worth and Salary in 2019

Mike Emrick has an estimated net worth of $2 million as of 2019. Currently working as the lead announcer for NHL national telecasts on both NBC and NBCSN, he is believed to earn $500,000 per annum as salary. Also, he earns extra bonuses and incentives for contributing as a sports announcer and commentator in several sports matches.

zoom in on the mic pic.twitter.com/GDidY131u2

According to the source, Emrick is reported to have invested in many other agriculture businesses. Also, he owns a horse farm.

Mike Emrick, 72, is a married man. He tied the knot with Joyce Anne in the late 1990s. However, the duo prefers their love life off the camera. Currently, the duo resides in St. Clair, Michigan. Even though they have no children of their own, they spend time with their beloved dogs.

In 1991, he was diagnosed with prostate cancer but is all fine now.

A native of La Fontaine, Indiana, Mike Emrick was born on August 1, 1946. His star sign is Leo. By nationality, he is an American and belongs to white ethnic background.

He has been taught speech and broadcasting at Geneva College located in the Pittsburgh for about 2 years and got his first experience as an unpaid correspondent for The Beaver County Times newspaper covering the Pittsburgh Penguins of the NHL.

He started his professional broadcasting career in 1973 when Morris Snider, GM of Port Huron Flags hired him to do play-by-play on WHLS radio and public relations for the IHL team. He then served as the Devils first voice in New Jersey, arriving for the 1982-83 NHL season.

He wore several hats working for the Philadelphia Flyers as a spot announcer 1983-86. He then worked as an in-studio analyst not covering national games and was promoted to lead play-by-play for both local TV and cable for the team in 1988. He was paired with Bill Clement who is a former NHLer and national hockey broadcaster, for over 4 years. He then returned to the devils to replace Gary Thorne and continued to be the Devils' voice until July 2011.

He has also done play-by-play for various channels including CBS, NBC, ABC, TNT, ESPN, and Fox Sports Net and was the lead play-by-play announcer for The NHL on ESPN from 1986-88. His first national television work over the air started for CBS by doing ice hockey at the XVI Winter Olympic Games at Albertville, France in 1992. 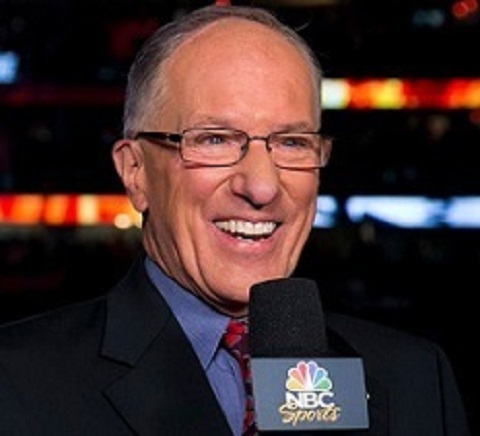 Mike is a legend born in the world of hockey and has called over 3,000 games in 39 years. Though hockey is his life, baseball was his first love. He grew up in rural Indiana and listened to the Pittsburgh on KDKA Radio with Bob Prince on the microphone. He has been behind the microphone for some of the most memorable games in modern hockey history.

He won the 1997 National Cable ACE award for the best play-by-play announcer in 1997. He was awarded by the Hockey Hall of Fame as Foster Hewitt Memorial Award for his outstanding contributions to hockey broadcasting.

He became the first hockey announcers who won a Sports Award for "Outstanding Sports Personality – Play by Play" for his work on the "NHL on NBC". He also won the NSSA Sportscaster of the Year award for the year 2013. Sports Illustrated named him as its 2014 sports media "Person of the Year".