Mikal Bridges reportedly earns $3,557,400 as his yearly salary from Phoenix Suns. Further, Mikal Bridges’s net worth is still being calculated. Mikal is in a relationship with very beautiful Grainger Rosati.

Mikal Bridges was born on August 30, 1996, in Philadelphia, Pennsylvania to parents, Tyneeha Rivers and Jack Devine. Mikal's parents separated when he was a child and was raised only by his mom.

As per Bridges' nationality, he is American and belongs to Black ethnic group. Further, his star sign is Virgo. He grew up along with his siblings, Korey Bridges, Eric Bridges, Jack Bridges.

Mikal, in his high school career, held an average of 18.5 points and 7.2 rebounds. After completing high school, Mikal enrolled at Villanova University and played for Villanova Wildcats.

On June 21, 2018,  Bridges was picked by the Philadelphia 76ers in the first round of 2018 NBA draft. He became the tenth player to be selected from the draft along with Landry Shamet, Issac Bonga and Khyri Thomas.

Soon after, Bridges was traded to Phoenix Suns for Zhaire Smith. On July 1, 2018, he joined the 2018 NBA Summer league Squad alongside the 1st-pick Deandre Ayton.

On July 6, 2018, Mikal signed a rookie scale contract with Phoenix Suns. In his Summer debut, Bridges recorded 14 points on perfect shooting and 3 rebounds. In that same league, he had an elbow injury. 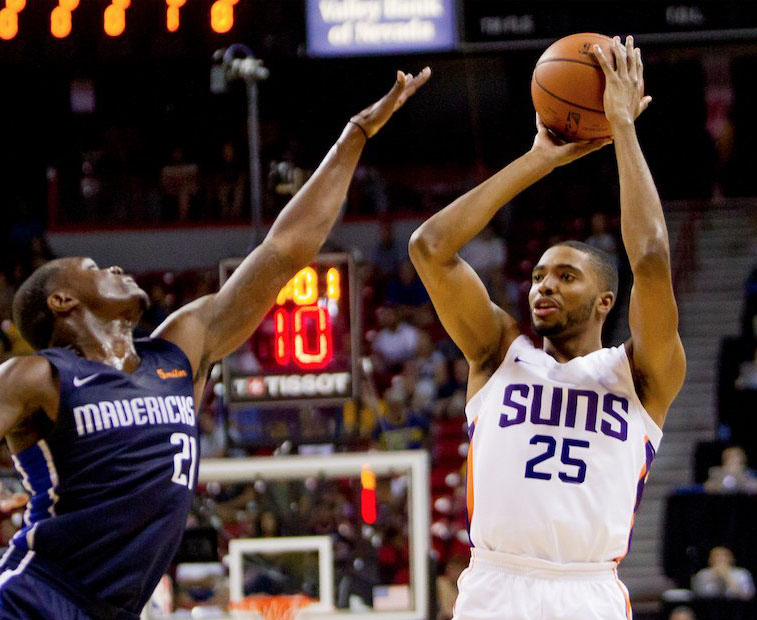 On October 31, 2018, Bridges scored a career-high 16 points with 3 assists, 2 steals and 1 rebound in a game against the San Antonio Spurs. The former excellent shooter has also won the Julius Erving Award.

About Personal life of Mikal Bridges, he is now 22 years old. He is in a relationship with a beautiful girl named Grainger Rosati. It appears the two began dating in their college years. Grainger, herself is an athlete and plays for Varsity lacrosse team in Villanova.

Had to take her down here and show her my Dominican roots ??????

It is their love for sports that brought them together, Rossati is also quite an impressive athlete. As for the general information, Mikal's mother, Tyneeha Rivers is the Vice-president of Human resources for Harris Blitzer Sports and Entertainment, a company that handles the hiring for the Philadelphia Sixers.

Mikal Bridges's Net Worth and Salary

As Mikal Bridges is an emerging player of NBA, the Net Worth of Bridges is still being calculated. He reportedly signed a contract with Phoenix Suns on July 6, 2018. Further, the NBA player has an average salary of $3,557,400 annually.

As per the contract of rising shooting guard/small forward the projected salary is:

Before the NBA draft, Bridges signed an endorsement deal with Wealthsimple, a digital investment company. He will help the company promote long-term financial planning. Instead of the typical endorsement compensation, Wealthsimple awarded Bridges a $50,000 Exchange Traded Funds portfolio.

Other than being a rookie NBA Small forward / Shooting guard, Mikal Bridges is quite famous in social media. He has 74.9k and 14.8k followers on Instagram and Twitter respectively.