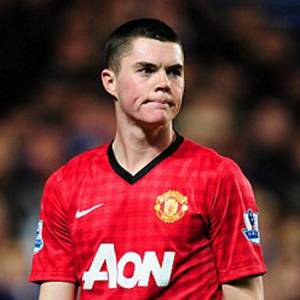 An English professional footballer Michael Vincent Keane is popular as Michael Keane who plays for Premier League club Everton as a defender wearing the shirt no. 4. Since 2012, Keane has represented England in several tournaments both in junior and senior level. Prior to this, he used to play for Republic of Irelands.

Michael Keane was born on 11th January 1993, in Stockport, England. His birth sign is Capricorn and his birth name is Michael Vincent Keane. Talking about his nationality, he is English and is of white ethnicity.

He began football career with South Manchester in nearby Cheadle, before joining Manchester United as an academy scholar in the year 2009.

Michael Keane signed his first ever professional contract with Manchester United on his birthday on 18th of January 2011. On 25th October, he made his professional football career debut in the League Cup over a victory against Aldershot Town.

In the year 2012, he won “The Denzil Haroun Reserve Player of the Year Award”.

On 6th November 2012, Keane along with his teammate Jesse Lingard moved to Leicester City, signing a loan deal until 3rd December 2012, which was later extended to 2nd January 2013. For Leicester, Keane made his debut against Bolton Wanderers in a 0-0 draw, on 6th November 2012. He scored his first goal against Huddersfield in a 2-2 win on 12th February.

On 28th November 2013, he was again loaned to Derby County until 2nd January 2014. On 7th December 2013, he made the first appearance for the club in a 5-1 victory against Blackpool. Overall, he made 7 appearances for the club and then switched to Blackburn Rovers on loan deal for the remainder of the 2013-14 seasons where he was handed the shirt no. 16.

On 9th March 2014, Keane made debut for Blackburn Rovers in a 2-1 loss at home to Burnley.

After playing almost 10 matches he returned to his parent club for the Championship season where he was named on the bench for Manchester United's last home match of the season against Hull City.

On 24th August 2014, he made his league debut for Manchester United against Sunderland replacing Chris Smalling.

On 2nd Of September 2014, Keane moved to Burnley to complete the loan spell until January 2015. Further his loan deal was made permanent, with the club signing a 3 ½ years contract on 8th January 2015.

Ultimately he made 90 appearances and scored 7 goals for the club.

On 3rd July 2017, Keane arrived in thePremier League club Everton, signing a 5-year contract for a fee of $33.32 million. On 12th August he made his debut against Stoke City in a 1-0 win. For the club, his first goal came in the UEFA Europa League against Hajduk Split on 17th August.

Michael Keane belongs to Irish ancestry which made him eligible to play for the Republic of Ireland national team. He represented Ireland in various tournaments in junior level. He was a part of Ireland U-17 and U-19 national team.

In the year 2012, he received a first call-up to for England U-19 squad. On 25th May 2012, he made his U-19 debut for England against Slovenia in a 5-0 victory. Keane also represented England in several tournaments being a team member of England U-20 and U-21 national team.

On 4th October 2016, Interim manager Gareth Southgate called Keane into the full England team for the “2018 World Cup qualifying match" against Malta on 8th and Slovenia on 11th October. On 22nd March 2017, Keane made his international debut in a friendly match against Germany.

The 24-years-old sports star, Keane was rumored to be dating the reality star Lauryan Goodman, who was previously in a romantic love affair with footballer Jordan Clarke. The two were spotted walking out of Manchester’s Rosso restaurant. However, it was later cleared that they were just leaving the restaurant at the same time and Keane had no idea who she is.

Hence, as per our record, Michael Keane is possibly single and unmarried. Although he suffers the social media sites such as Instagram, Twitter, and Facebook actively, he has not posted single photos with a lady who could be his possible girlfriend and wife.

A star of FC Everton, Michael Keane has earned his wealth widely through his career as a professional footballer. Throughout his footballing career, he has played for several renowned football clubs including Manchester United and  Burnley.

As of 2017, Keane is receiving $80,148 as his weekly wage and $4.1 million as his annual salary from his current club, Everton. He has an estimated net worth around $6 million including all of his incomes and assets.

Aside from his football career, Keane too adds a good worth to his net worth through his endorsing deal with Nike.