Charlie Savage is a Welsh professional footballer who is currently signed to the Premier League side the Manchester United as the midfielder. At the international level, he has represented Wales U17 (2019), Wales U18 (2021), & Wales U19 (2021-).

Leicester, England native, Charlie Savage was born on 2nd May 2003, under the star sign Taurus. he holds a Welsh nationality. The eighteen years old stands 6 ft 0 in (1.82 m) tall.

How Much Is Charlie Savage's Net Worth in 2022?

A celebrity child, Charlie has always been in the spotlight as a son of Welsh football star, Robbie but after he signed to Manchester United professionally, he has it solo.

Since being teamed up with the senior team, the public is curious about his love life. But sadly there is no report about his dating life, not even his relationship status. Yes girls there is a chance for you.

Charlie Savage is active on Instagram with 90.3k followers. His IG posts are all football. 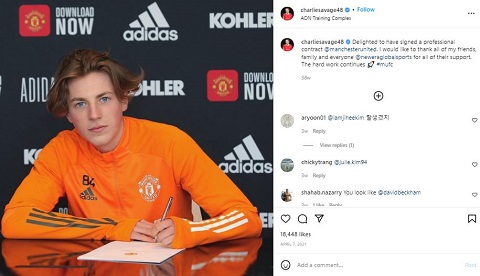 On 8th December 2021, he made his first-team debut where he entered in the 89th minute of the 2021–22 UEFA Champions League, replacing Juan Mata against Young Boys. His father Robbie savage co-commented the match for BT Sport.

Charlie Savage is one of two sons born to a Welsh former professional footballer, Robbie Savage, and his wife Sarah.

Further, he represented Wales national tea, from 1995 to 2004, earning 39 caps with 2 international goals.

He is now a pundit for the BBC and regularly presents 606 on BBC Radio 5 Live on Sunday evenings. He also co-presents Early Kick-Off on BT Sport. director of football at non-league Macclesfield F.C.

Savage followed in the footsteps of his father and now he is already a squad of Manchester United. Robbie said that he does not see the likeness with his son rather he states Charlie is more of a technical, ball-playing midfielder, rather than a tenacious player.

"Charlie is great at passing through the lines" and one of the "fittest players at Manchester United," Robbie said.