Sam Johnstone is a professional football player from England who plays in England's top league, English Premier League. He plays in the goalkeeper position for the club West Bromwich Albion. He has been with the club since the start of the 2018 season and wears the Number 1 jersey for the team.

The West Brom's goalkeeper also plays for England's national team and has represented in multiple national tournaments. But he is not the first choice keeper of England as there are other keepers like Aaron Ramsdale, Jordan Pickford, Nick Pope, and Dean Henderson. He has represented England to be the winner of the UEFA European U-17 Championship in 2010.

Samuel Luke Johnstone, famously known as Sam Johnstone was born on 25 March 1993, in Preston, Lancashire, England. According to astrologers, his birth sign is Aries. His father's name is Glenn Johnstone and his mother's name is not known, but once he posted his photo with his mom on Mother's Day. His father, Glenn was also a professional footballer who used to play for the Preston North End back in the days.

He grew up along with his younger brother Max who also plays football. Previously, he was in Manchester United's youth team.

His weight is recorded to be around 85 kg.

Read also:- How tall is Rowe? His height and weight

Johnstone's monetary worth, Salary and Contracts

According to the sources, the net worth of England's keeper Sam Johnstone is estimated to be $800,000 approximately. His main source of income is from playing football professionally. According to transfermarkt, his market value is 8 million pounds approximately. It has been consistent since 2019. Before that, West Brom bought him from Manchester Unites at just a fee of 7.3 million pounds.

Read also:- What is the Net worth of Lotomba? His salary and contract with Nice

Who is Sam Johnstone dating?

As of 2021, there is no news about the dating life of Sam Johnstone. It is not even sure whether he is currently in a relationship or not. He is a quite secretive persona and silent about his relationship status.

But in 2012, he was dating his cute love, Bryony Turner. The couple were together for at least 1 year But as of now, they are not seen together and must have broken up. 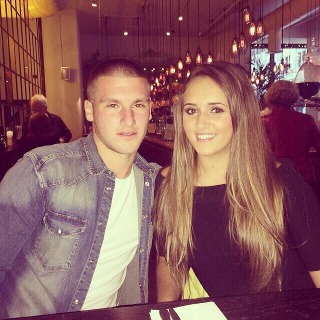 On a few occasions, he has shared photos with his past partners on his Instagram but has never mentioned their names. So, it is hard to find his girlfriend's full information.