Maurice Hooker is an extremely talented professional boxer who once held the record of 26 straight professional wins, with 3 draws, before José Carlos Ramírez ended it. However, the loss didn’t affect his game at all, and he returned to his winning form. Currently, he is ranked as the sixth-best active lightweight boxer in the whole world.

Hailing from the suburbs of Dallas, Texas, the American boxer was born on August 7, 1989. He is currently 33 years old. He goes by the birth/real name of Maurice Dewayne Hooker. He has not revealed any details about his parents. However, it is known that he didn’t spend much time with his father as his father was in and out of his family, and his mother had fought drug addiction. Alongside that, it is also known that he has a brother.

The former WBO light welterweight title has competed in 31 fights with only one loss and three draws. Considering such a good record, it must be sure that he has earned some decent earnings from those matches that he won.

However, Hooker has not revealed those details to the public and also has not disclosed his total net worth. Nonetheless, as per ziprecuiter.com, it is known that a professional boxer earns an average salary of $37,501 per year.

The orthodox professional boxer is a happily married man. He has been married to his wife for a very long time. However, to this date, he has not shared any details regarding his wife's name and where she is from.

Though he has not shared any details about his wife, he has shared some amazing pictures with his life-partner, which can be witnessed through his Instagram handle. Other than that, it is known that he and his wife are the parents of 8 children, seven sons, and one daughter. 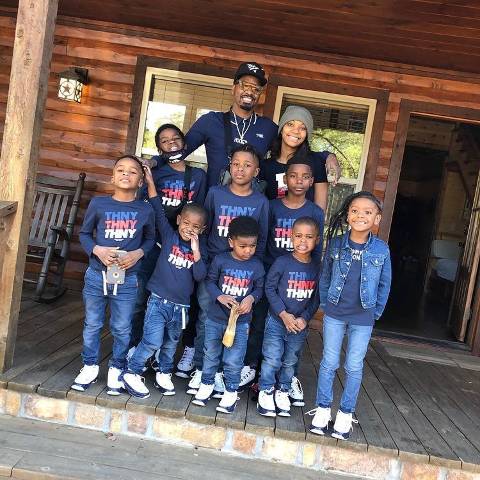 He is very close to his children and often flaunts pictures with them through his Instagram handle.

The Dallas, Texas native fighter started his professional career in 2011 after a brief period as an amateur. His first professional fight was held on April 29, 2011, against Tyrone Chatman, which ended up in a draw.

Hooker only received his first when on June 24, 2011, when he defeated Wilbert Mitchell via KO. Since then, he has never looked back and continued to give his best in every fight he did.

Following 19 fights, the boxer finally got the chance to hold a title when he competed and defeated Mexico’s Eduardo Galindo for the vacant WBO-NABO light welterweight title. After winning the title, he went on to successfully defend it against several other boxers.

His first defeat came on July 27, 2019, when he fought against José Carlos Ramírez—lost his WBO light welterweight title. Nonetheless, he backed himself up and won the next fight against Uriel Perez.

Hooker is currently focusing on his upcoming fight against Vergil Ortiz Jr. The match is scheduled to happen on March 20, 2021, and it is for the WBO Intercontinental welterweight title.