Peter Clay Carroll a.k.a. Pete Carroll is an American football coach who currently stands as the head coach and executive vice president of the Seattle Seahawks of the National Football League (NFL). Also, he the founder of a high-performance training company, Compete to Create, which is headquartered in Seattle.

Currently, Carroll's net worth is approximately $30 million, solely earned from his coaching career in the NFL. As of 2020, it's been forty-seven years that Pete Carroll is active in a coaching career. He started as a graduate assistant in 1973 and went through various other roles such as secondary coordinator, defensive coordinator, and defensive backs coach and finally became the head coach in 1994. 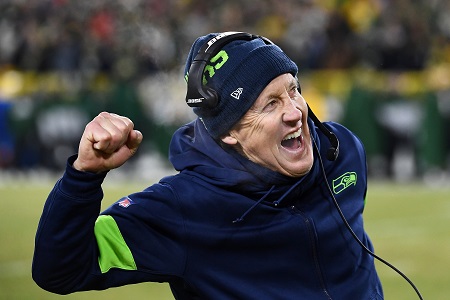 Since 2010, Pete Carroll is the head coach of the Seattle Seahawks. On 10th January 2010, he signed a five year $35million contract with Seattle, earning an annual salary of $7 million till 2014. On 24th December 2018, he signed a three-year contract extension with Seattle. As of 2020, his salary from the team $11 million per annum, which makes him the 2nd highest paid NFL coach after New England Patriots' head coach, Bill Belichick.

Pete Carroll's Wife: Is He Married?

Pete Carroll first married a lady named Wendy Pearl (1973-1975). Unfortunately, there is less to no information regarding his first spouse.

In 1976, Carroll tied the knot with Glena Goranson, who played indoor volleyball at the University of the Pacific. The couple shares three children: Brennan, daughter Jaime, and younger son Nathan. 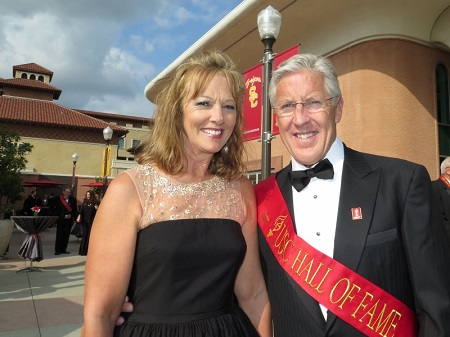 Through their elder son, Brennan, and his wife Amber, Carroll is grandfather to Dillon Brennan Carroll. Though Brennan Carroll played tight end at the University of Pittsburgh, he followed his father's footsteps and pursued a career as a coach and joined his father as a graduate assistant. He is now an assistant coach.

In the fall of 2000, Jaime Carroll began enrolling at USC, several months before Pete Carroll was hired as a football coach. Also, she was a player on the Women of Troy's women's volleyball team. The youngest son, Nathan, graduated from USC with a bachelor's degree in May 2010.

Pete is the son of Rita and James Edward Carroll. He enrolled at Redwood High School in Larkspur, California. Due to lack of physical growth as a teenager caused him frustration in high school sports; weighing just 110 pounds (50 kg) as an incoming freshman. To try out for football, he was required to bring a special doctor's clearance in order. He was a multi-sport star in football (playing quarterback, wide receiver, and defensive back), basketball, and baseball, earning the school's Athlete of the Year honors as a senior in 1969.

Next, Pete became the defensive coordinator for the San Francisco 49ers. In 2000, he landed the job that would bring him the most success to date, as the head coach of the USC Trojans. There he went on an incredibly successful run between 2001 and 2009. In 2010, Pete was hired as the head coach of The Seattle Seahawks.