Matt LaFleur is an American football coach by profession who currently holds the head coach position at Green Bay Packers in the NFL. In his first two seasons at Green Bay, he led the team to two NFC North Crowns and two appearances in the NFC Championship Game.

Before coaching at Green Bay, he also coached as a quarterback coach at Washington Football Team and Atlanta Falcons. He is the 15th head coach of the Packers, leading the team to 13-3 records. 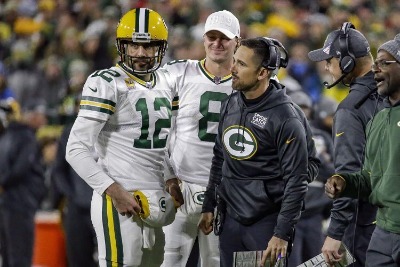 Who is LaFleur? (Family and Early Life)

He went to Mount Pleasant High School, later attended Michigan University, and transferred to Saginaw Valley State for his college. He used to play as a quarterback during his college days. He currently resides in Mount Pleasant, Michigan.

The family gene for football

Matt is the third generation to coach in LaFleur's family. Before, his father, Denni LaFleur, also used to coach football teams.

His grandfather, Bob, also coached for nine years at Loy Norrix High School. His mother, Kristi, was a cheerleader and an athletic coach.

Matt's younger brother Mike LaFleur is also a passing game coordinator at the San Francisco 49ers. The LaFleur brothers met in January 2020 in which Matt lost to Mike by 37-8.

Net worth and Career earnings of LaFleur

According to different sources, Matt LaFleur has an estimated net worth of $7 million. However, he has never opened up about his net worth in media and lives a respectable lifestyle with his wife and children. 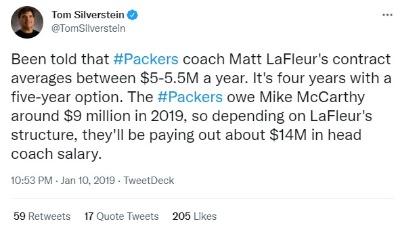 The NFL's top coach accumulated most of his income from coaching for different teams. He has an average salary between $5 million and $5.5 million yearly at Green Packers.

According to Tom Silverstein, a sports reporter for the Milwaukee Journal Sentinel, Matt signed a contract worth $5 million per year with Green Bay Packers.

The amount LaFleur is earning at Green Bay is significantly less than their former head coach Mike McCarthy. McCarthy used to earn $8 million during his time yearly before he was fired in 2019.

Some sources claimed that the Packers still owed about $9 million to their former head coach McCarthy. So, they were bound to pay $14 million for the head coach the following year.

Read about Matt Campbell's Net worth and Personal Life

Wife and Kids of Matt LaFleur 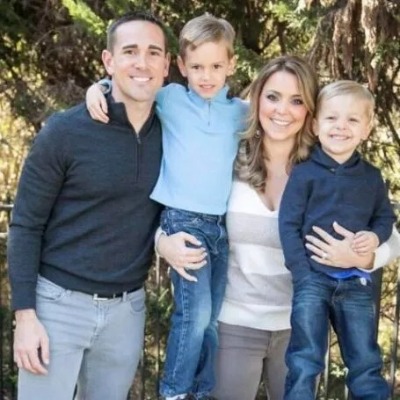 Read about the relationship status of Brian Kelly

The couple got married after few years after graduating from college in the presence of their close friends and relatives. Matt's best man in his wedding ceremony was Robert Saleh. Robert and Matt were colleagues who worked as graduate assistants at Central Michigan.

Mike's brother Matt and his wife Breanne are blessed with two children, both boys. Their younger son's name is Luke, born in June 2011. LaFleur's elder son is Ty LaFleur and was born in August 2013.

Journey to the NFL Head Coach

Matt started his career as a player with Omaha Beef. He played American football for Mount Pleasant High School and then with Western Michigan and Saginaw Valley State University. The player played in the National Indoor Football League with the Omaha Beed and had signed with Billings Outlaws. However, LaFleur moved to Saginaw Valley State as their offensive graduate assistant.

In 2004, Matt moved to Central Michigan and then to Northern Michigan as their Quarterback/wide receiver. After spending a season with the team, He moved to Ashland. In 2008, Matt made his breakthrough in the NFL signing with the Houston Texans as their Offensive Coordinator. The coach worked with the team until the 2009 season and then moved to the Redskins in 2010.

Matt had a good time with the club and then moved to Notre Dame for a season in 2014. In 2015, The Falcons hired him as the Quarterback coach. LaFleur spent a season with The rams and then with the Titans in 2018. In 2019, The Green Bay Packers signed Matt as their Head coach and officiated in almost fifty games.