Matt Campbell is a professional American football coach who is currently the head coach at Iowa State University since 2016. Before coaching, he played as a defensive end winning 4 conference titles and 3 NCAA Division III national championships.

The 2015 MAC Coach of the Year led the Cyclones to 4 straight bowl games giving them one of their best period in history. In 2019, he led Iowa University to a 6-3 record in Big 12 Play. It is the Cyclones most conference wins in history. 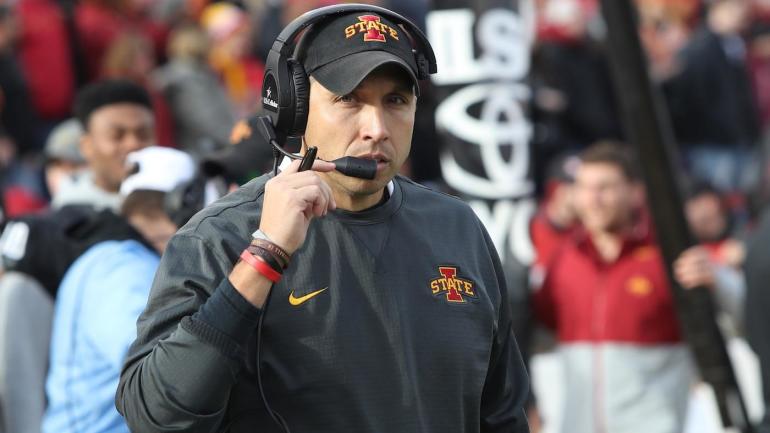 Before starting his coaching career, he played football at Perry where he won 3 conference championships.

Iowa University head coach Matt Campbell has an estimated net worth of $12 million. He gained most of the earnings from coaching at different teams and initially playing football. The annual salary Matt earns is around $3.5 million at Iowa University. In November 2017, he signed a $22.5 million contract extension. In addition, the University also provided him with $1 million incremental raises for his staff.

In 2017, 3 times Big 12 Coach of the Year was one of the lowest-paid coaches in the Big 12 Coaches but does not hold the title anymore.

According to sources, the Detroit Lions offered him a contract worth $68.5 million with "Full control" for 8 years. But Matt turned the contract down only to stay at the Cyclones.

Read about Matt Canada net worth

Matt Campbell is currently living a happy married life with his wife Erica Campbell. The couple got married a few years back in the presence of their close friends and relatives after dating for more than 5 years.

Campbell's wife Erica also did her Bachelor's degree from Mount Union in 2002. He met his current wife during his senior year at Ohio and has been together since then. CAPTION: Matt Campbell and his wife Erika with their children SOURCE: https://cyclones.com/sports/football/roster/coaches/matt-campbell/1687

Along with his wife, Erica is also a great supporter of his husband Matt and has supported him in all highs and lows. The Iowa head coach never forgets to praise his sweetheart when given a chance. Once he said;

“She’s been with me every step of the way and she is unbelievably the rock of my life.”

Matt and Erica are blessed with 4 kids, 2 daughters, and 2 sons. Their eldest daughter is Katie Campbell and the youngest one is Rocco. The other 2 children are Izzy Campbell and Rudy Campbell.

Matt Campbell is also active on  Twitter with the username @ISUMattCampbell and has more than 73,000 followers.