Marcus Freeman is a well-known American football coach. He has been working as the head of the University of Notre Dame since 2021. After being picked by Chicago Bears, Marcus played in the NFL for a season in 2009. Freeman previously served as the defensive coordinator and linebackers coach at Notre Dame in 2021.

On January 10, 1986, Marcus Freeman was born in Dayton, Ohio. He is the son of Michael Freeman and his wife, Chong Freeman. His father served in the Air Force in South Korea. Freeman has an older brother Michael Jr. Marcus graduated from Wayne High School and enrolled at Ohio State University. Marcus stands six feet and one inch tall and weighs 109 kg.

Marcus Freeman has an estimated net worth of more than $5 Million. He has earned most of his net worth through his successful career in NFL as a player and a coach. Freeman signed a four-year contract at $2.5 million per season with Notre Dame in 2021. 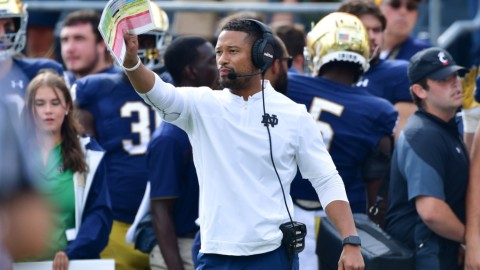 Marcus has been working as the head coach of Notre Dame SOURCE: Athlon Sports

Father of Six Children: Who Is Freeman's Wife?

Marcus is the proud father of six children. Freeman walked down his wedding aisle in 2010 with his longtime girlfriend, Joanna Herncane. The love birds had been dating each other for several years before their marriage. They have not shared much about their first meeting experience. 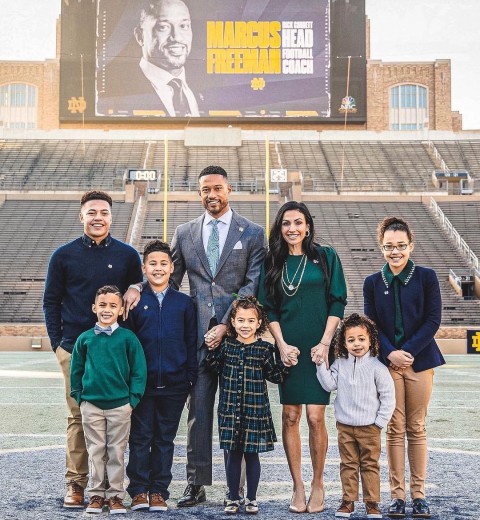 Marcus shares a photo with his wife and children SOURCE: [email protected]

Marcus and his wife Joanna have six children, Vinny, Siena, Gino, Nico, Capri and Rocco. The family of eight is living a happy married life. There has been no rumor of the couple having ups and downs in their married life. Marcus does not show much presence in social media and has successfully kept his personal life away from the media.

Journey to The Head Coach of Notre Dame

Marcus started playing football from High School. The multi-talented athlete also ran track, competed in the 4×100-meter relay, and threw the shot and discus. After graduating from High School, He committed to playing at Ohio State University. Freeman played as a linebacker for most of his time and then listed his name for the 2009 NFL draft.

Chicago Bears drafted him in the 2009 NFL draft in the fifth round, overall 154th pick. He was shortly waived and then signed with Buffalo Bills. In October, Marcus got released from Bills and signed with Houston Texans, but Freeman retired due to an enlarged heart condition. The player joined Kent State as their Graduate Assistant and then moved to Purdue University as linebackers.

In December 2016, Marcus joined the Cincinnati Bearcats. He worked with the team as their linebackers coach and was ranked among the top coaches in the positions. In January 2021, Notre Dame hired him as their new head coach, replacing Brian Kelly.