Marcelo Vieira da Silva Júnior is a Brazilian mostly known by the name Marcelo is a Real Madrid defender who plays the role of left-back and sometimes also provides the assist of a right-winger. The Brazilian debuted for the national team in 2006 against Wales and was a part of Brazil's squad in the 2014 FIFA World Cup, where he reached the semi-finals and was named to the tournament's Dream Team.

With a jaw-dropping net worth over $17 million, Marcelo is living a lavish lifestyle with his wife and children.

As of 2019, Marcelo has an estimated net worth over $17 million. Being one of the famous footballers in the world and playing for one of the biggest clubs Marcelo owns a fortune to his name with huge income, endorsement deals, bonuses, and many different achievements.

Adidas unveiled Marcelo as new icons for the German brand during a promotional event with teammates Gareth Bale and Karim Benzema.

He has a personal investment of around $8.1 million USD  in different businesses and the player also likes to spend big when it comes to the automobile. Marcelo has 5 luxury cars worth $1.million USD ranging from the Bugatti Veyron to Audi and a luxury full mansion.

Marcelo has a number of tattoos, including his shirt number and day of birth tattooed on his left arm. He got married to Brazilian actress Clarice Alves in 2008 having been in the relationship since they were 15. 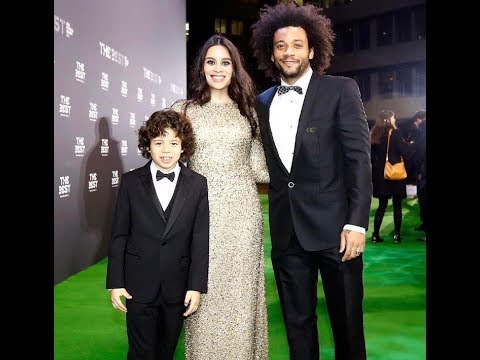 Clarice is a professionally trained actress who's studied in nearly half-a-dozen countries. She's also an experienced Muay Thai practitioner. She gave birth to their first son, Enzo, in September of 2009. She gave birth to a second son, Liam, in 2015.

Marcelo dedicates every goal to his grandfather whom he adores and his wife. He said for Real Madrid TV that if it wasn't for Pedro he would have never played football for Fluminense. He is a supporter of Botafogo FR from Rio De Janeiro and wishes to play for the club and on 26 July 2011, Marcelo attained Spanish nationality.

Born on 12 May 1988, in Rio De Janeiro, Brazil. His father Marcelo Vieira da Silva and mother Maria da Silva came from a very poor family and Marcelo said he even considered quitting football at some point but his club, Fluminense took him as one of the brilliant players and encouraged him to continue playing.

In 2005, Marcelo won a Campeonato Carioca with Fluminense and in 2006 was named to the Brasileirão  Team of the Season, at age 18.

After two years with Fluminense, Real Madrid in January of 2007, signed  Marcelo saying he will bring freshness into the squad. Many fans and players hail him as Roberto Carlos's successors in left-back role.

Real Madrid is in the league of their own as far as recent success is concerned, 3 champions league titles and last 4 years and beating Barcelona to La Liga title in 2016-17 season wrapped up incredible few seasons for Madrid.

National and Club Career of Marcelo

Making his debut for the club as a substitute on 7 January 2007, Marcelo soon starting regularly for the first team but with poor performances soon found himself back on a bench.  Following season under the management of new coach Marcelo teamed up with Sergio Ramos to protect the back which suited him.

In 2009-2010 season, Marcelo consistently started in the first team for his pace and versatility under the new coach Manuel Pellegrini. The breakthrough season saw him reach the top of the assist of La Liga chart, which led to his contract extension until June 2015.

With Jose Mourinho appointed as the new head coach in the 2010-2011 season, Marcelo had much more confidence in attacking strength and defensive steel. The season proved to be very good for him as well as the club. Even Diego Maradona said Marcelo was the third best player in La Liga after Cristiano Ronaldo and Lionel Messi.

After suffering a defeat of 3-2 against their biggest rivals F.C Barcelona where he got sent off. Marcelo also suffered an injury playing against Real Betis but made his come back in 2013 and captained the team.

Marcelo scored Madrid's third goal in the 2014 UEFA Champions Leauge Final against city rivals Atletico Madrid 4-1 in the extra time. He signed a new deal with the club on 10 July 2015 keeping him at the club until 2020.

Marcelo got to play for Brazil in 2012 Olympics where they won a silver medal and was also selected as a member of Brazil's to play in 2013 Confederation cup which they won a 3-0 victory over Spain in the final.