Mahmoud Abdul-Rauf is a retired American professional basketball player who played basketball for Gulfport High School before joining Louisiana State University to play college basketball for the Tigers. He was selected with the third pick in the 1990 NBA draft by the Denver Nuggets. In 1993, he changed his name from Chris Jackson to Mahmoud Abdul-Rauf after turning to Islam in 1991.

A native of Gulfport, Mississippi, USA, Abdul-Rauf, was born on March 9, 1969, under the star sign of Pisces. He has a tall figure of 6 ft 1 in and a weight of 73 kg. He attended Louisiana State University. During his nine years of active NBA career, he played for a number of teams.

Mahmoud Abdul-Rauf Net Worth and Earnings

Basketball players' yearly earnings range between thousands of dollars and millions of dollars, depending on several factors. Typical NBA players like Abdul-Rauf made a salary of about $2 million on average annually whereas the top players in the league, such as Lebron James, Marc Gasol, Al Horford, earn over $100 million.

After NBA in 1998, Abdul-Rauf signed a two-year contract for $3.4 million with Fenerbahce of the Turkish Basketball League. Besides his earnings from basketball, he also had a sponsorship with Nike.

Abdul-Rauf has a reported net worth of around $5 million.

The 50 years old Abdul-Rauf was at first married to Kim Jackson. Together they have five children, but their names at the moment remain unknown. The couple both attended LSU where they first met and eventually started dating. 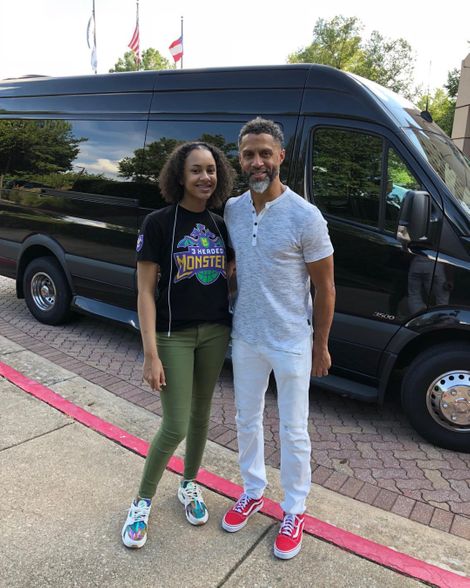 As Abdul-Rauf converted his religion to Islam, he wanted his wife, Kim, to wear a veil in public. He felt that it was customary for Muslim women. But she did not comply with his request. He said,

"I was looking for support, someone to be with me because I really felt that I was changing for the better like I was becoming a better man." This resulted in a divorce between the two."

Mohamoud filed for divorce against Kim, who was raised a Roman Catholic, citing religious differences irreconcilable in around 1994. The divorce followed the isolation he went through during the nine seasons as an NBA player.

Abdul-Rauf was born Chris Jackson in a single-parent family. He was the son of Jacqueline Jackson. He grew up in Gulfport, Mississippi. He has two brothers, Omar and David Jackson. He spent his childhood days in poverty, and there were times when he and his brothers could not feed on proper nutrition.

At the age of 17, it was found that Abdul-Rauf was diagnosed with Tourette Syndrome, a genetic neurological disorder with onset in childhood. However, it was moderate in terms of treatment. It had gone undiagnosed until he turned 17. Thanks to his determination, he overcame the difficulties to become a basketball prodigy for Gulfport High School.

Abdul-Rauf refused to stand for the US' national anthem "The Star-Spangled Banner" before games. He said that the flag was a symbol of oppression and tyranny.  For his refusal to stand, he was fined $31,707 per missed game as the NBA suspended him.

Two days later, he came up with a compromise with the league. He would stand during the playing of the anthem but look downward with his eyes shut.