Luke Kuechly is an American professional football player who currently plays as the linebacker for the Carolina Panthers of the National Football League (NFL). The 7-time Pro- Bowl played college football at Boston College and was picked 9th overall in the 2012 NFL Draft by the Panthers.

Along with his monetary value, he also has a huge car collection. The Car brands owned by Luke Kuechly are Cadillac, Audi and BMW, and more.

Who is Kuechly Married to?

Luke Kuechly married his long-term girlfriend, Shannon Reilly, whom he started dating in 2012. They both are Catholic high school graduates in Cincinnati and probably first met in high school. 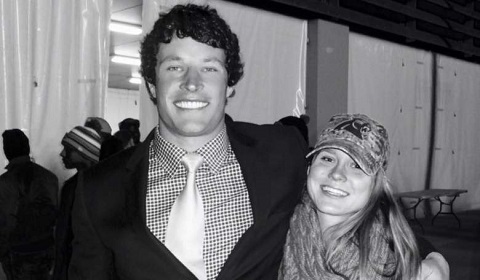 His wife, Shanon Reily, was once a professional club field hockey player and now is set to become either a surgeon or a surgeon’s assistant. She is currently doing her Masters's in Physician Assistant Studies at Gardner-Webb University.

Shanon also grew up playing sports and was an assistant captain of the field hockey team in her school. She even played lacrosse in school.

The couple shares common interests and is supportive of each other. They are often spotted spending their vacations together exploring several beautiful places and are reportedly getting married soon.

Kuechly stands at 6 feet and 3 inches and weighs 100 kgs.

Luke Kuechly was born as Luke August Kuechly on April 20, 1991, in Cincinnati, Ohio, USA. His parents are Eileen Kuechly and Tom Keuchly.

After high school, Luke Kuechly developed his footballing skills even further with Boston college and played for the Boston College Eagles Team from 2009 to 2011. His professional career started in 2012 after the Caroline Panthers drafted him as the ninth overall pick in the 2012 NFL Draft. He was officially included in the team on May 10, 2012, signing a 4-year contract worth $12.58 million.

His performances in the first season earned him the AP Defensive Rookie of the Year and the second season with the Panthers honored him with the award of Defensive Player of the Year in 2013.

He was also among the top 100 NFL best players. He further signed a five-year contract worth $62 million extensions with the Panthers, making him the NFL's highest-paid middle linebacker by annual average salary.

His teammates with Carolina Panthers were Cam Newton, Greg Olsen, Jonathan Stewart, etc. In January 2020, Luke announced his retirement and worked as an executive member of the club.